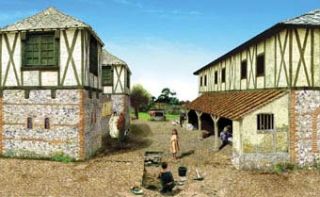 If Indiana Jones were a real archaeologist, he'd be just as likely to brandish a laptop with broadband as brush and note pad if a recent dig in the small English parish of Silchester was any indication.

Researchers from nearby Reading University employed a new methodology during this summer's dig season at the Roman site, excavating with the help of new technologies for streamlining the archaeological process. The innovations, collectively known as e-science, threaten to shrug off archeology's antiquated image.

Reading has worked at Silchester, considered one of the most important Roman sites in Britain, since 1997. This year, researchers abandoned the usual practice of collecting data manually and sorting it later, instead logging finds directly from the field using hand-held computers. An Integrated Archaeological Database System (IADB), developed by partnering York Archaeological Trust, houses their data in a central server at Reading.

Since the university's work began there eight years ago, everything uncovered at Silchester has been recorded and logged within IADB.

"Until now, the process of digitization has been separate from the process of excavation and initial recording," explained Mike Rains, IT Manager for the York Archaeological Trust and consultant at Silchester since 1997.

Not only do the techniques make recording data faster and easier, the creation of this Virtual Research Environment (VRE) at Silchester also allows for widespread participation in the project by researchers across the world. The entire swath of Reading's work at Silchester is available online in the IADB project database, accessible to anyone with an Internet connection.

"A key aim of the project is to publish all aspects of the project on the Web," Rains said in an email interview. This accessibility is helpful when particular elements of the research, like the dating of a pit, require the insight of a specialist thousands of miles away. With e-science, that individual can make an informed analysis at the click of a button, without ever having to set foot near the excavation.

Rains stressed that while archaeologists have always been eager to explore new technologies emerging from the computing sector, old habits die hard.

"The issue of user acceptance is likely to be a longer running challenge," he said of e-science. "This is not surprising; the previous manual working procedures were worked out over many years."