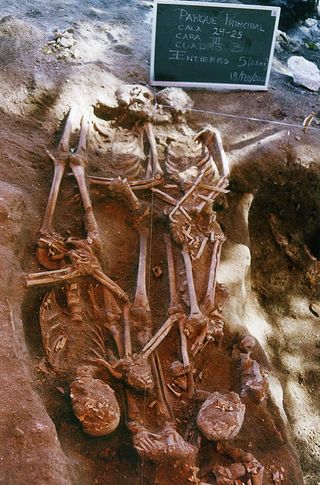 A grave where skeletons of Africans were found in the cemetery in Campeche, Mexico.
(Image: © T. Douglas Price)

Archaeologists have found what they think are the oldest remains of slaves brought from Africa to the New World.

The remains, in a colonial era graveyard in one of the oldest European cities in Mexico, date between the late-16th century and the mid-17th century, not long after Columbus first set foot in the Americas.

The African origin of the slaves was determined by studying a chemical in their tooth enamel that reveals plant and rock types of their native land. The chemical enters the body through the food chain as nutrients pass from bedrock through soil and water to plants and animals. It is an indelible signature of birthplace, the researchers said, because it can be directly linked to the bedrock of specific locales.

Researchers examined remains of four individuals from among 180 burials found in a multiethnic burial ground associated with the ruins of a colonial church in Campeche, Mexico, a port city on the Yucatan Peninsula.

"This is the earliest documentation of the African Diaspora in the New World," said study co-leader T. Douglas Price of University of Wisconsin-Madison. "It does mean that slaves were brought here almost as soon as Europeans arrived."

The discovery will be detailed in the American Journal of Physical Anthropology.

Over a span of nearly 400 years, as many as 12 million people were placed in bondage and brought across the Atlantic under horrific conditions to work, primarily, in the mines and plantations of the New World, Price and his colleagues said.

In early colonial Mexico, Campeche was an important Spanish gateway to the New World. It served as a base for exploration and conquest and was a key defensive outpost in a region infested with pirates, the researchers say. They think slaves from the infamous West African port of Elmina were shipped to Campeche where they may have been used as domestic servants.

The discovery of the remains of slaves born in Africa from such an early date shows that slavery became an integral aspect of the New World economy not long after the Conquistadors completed the subjugation of Mexico, Price said.

Archaeological and historical evidence, including a map of colonial Campeche, suggest the graveyard was in use from about 1550 to the late 1600s. It was uncovered, along with the foundations of a colonial era church, in 2000 by construction workers digging around Campeche's central park. The site was excavated under the direction of Tiesler.