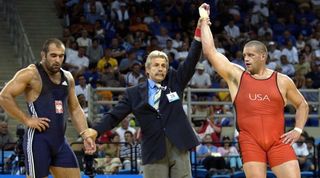 A new study of Olympic athletes finds that those wearing red have an advantage over blue-suited competitors.

The reason may have to do with hard-wired perceptions in the human brain that date back to more animalistic times, researchers say.

In the study, scientists examined one-on-one sports in the 2004 Olympics in which competitors were randomly assigned red or blue outfits or protective gear. The events: boxing, tae kwon do, Greco-Roman wrestling and freestyle wrestling.

In 16 of 21 rounds there were more red-clad winners. Looked at a different way, red prevailed in 19 of 29 weight classes. The researchers are careful to point out that the effect is probably subtle, such that red can be a deciding factor only among evenly matched competitors.

"We find that wearing red is consistently associated with higher probability of winning," University of Durham researchers Russell Hill and Robert Barton write in the May 19 issue of the journal Nature.

Hill and Barton also analyzed the Euro 2004 international soccer tournament, in which teams wore shirts of different colors in different matches. The preliminary results of that investigation suggest a similar advantage for red in team sports.

The scientists cite other studies that suggest red correlates to male dominance and testosterone levels in animals. And in humans, they note, "anger is associated with reddening of the skin due to increased blood flow, whereas fear is associated with increased pallor in similarly threatening situations."

Perhaps athletes have a subconscious reaction to red that puts them at a disadvantage, the researchers contend. And they offer this advice: "The color of sportswear needs to be taken into account to ensure a level playing field in sport."