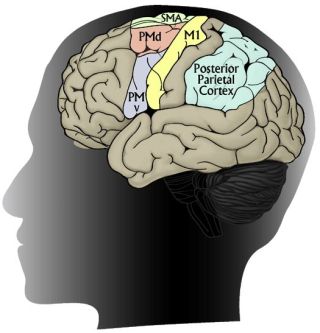 Don't blame your lame smile or lack of an intimidating frown on your upbringing, a new study suggests. Such behaviors may be hard-wired in your brain.

Scientists know many behaviors of lower organisms are innate. Ants instinctively follow other ants to a picnic basket. Birds operate largely on autopilot, dogs less so.

In people and monkeys, however, behavior is largely something learned, so researchers have assumed our hard-wiring is limited. If that's true, however, why do many reactions, such as aggression, play out the same among diverse populations around the world?

Scientists announced Tuesday they can elicit complex behaviors by stimulating specific areas in the brain of a small primate called the bush baby. Similar studies have been done on other primates.

"We have now seen this feature in the brain of an Old World monkey and New World prosimian," said study leader Jon Kaas of Vanderbilt University. "The fact that it appears in the brains of two such divergent primates suggests that this form of organization evolved very early in the development of primates. That, in turn, suggests that it is characteristic of all primate brains, including the human brain."

The triggered behaviors include aggressive facial gestures, defensive arm movements, putting hand to mouth and other reaching and grasping movements -- all survival skills.

"These results explain why certain behaviors - such as defensive and aggressive movements, smiling and grasping food - are so similar around the world," Kaas said. "It is because the instructions for these movements are built-in and not learned."

The results are detailed in the online edition of the Proceedings of the National Academy of Sciences.