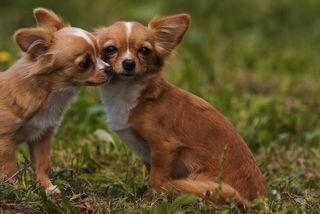 But the canine companions that crossed the Bering Strait with the ancient people who first settled the Americas have fared better, according to new research, published today (July 9) in the journal Proceedings of the Royal Society B.

A new genetic analysis of hundreds of American dog breeds reveals that the canines' ancient roots trace back to Asia. On average, less than 30 percent of their DNA comes from Europe, suggesting dogs came to the Americas with the ancient humans who established pre-Columbian civilizations.

The study also found that the Chihuahua really does come from an ancient lineage of dogs in Mexico. [The 10 Most Popular Dog Breeds]

In the 16th century, European colonizers came to the Americas and nearly wiped out the native people. With the conquerors came their own dog breeds.

"Many populations were wiped out and the culture disappeared with them, so there was nobody to take care of the dogs," said study co-author Peter Savolainen, an evolutionary geneticist at the Royal Institute of Technology in Sweden.

As a result, many researchers believed that most American dog breeds had predominantly European origins.

A few studies suggested that American dog breeds had indigenous roots, but they didn't have enough genetic data to say for sure.

To trace the roots of American dogs, Savolainen and his colleagues collected cheek swabs from 347 kennel club purebred dogs from the Americas. That sample included Alaskan malamutes, Chihuahuas, Peruvian hairless dogs and several signature American breeds. They then compared that DNA with 1,872 samples from dogs in Asia, Europe and Africa. They also tested 19 free-roaming strays from the Carolinas as well as a few other free-roaming dog breeds from South America.

Most of the American dogs had ancestry tracing back to Asia, with only 30 percent of their ancestry from Europe. That suggests their ancestors arrived in the Americas in one of the migration waves across the Bering Strait.

The Carolina dogs carried genetic markers that come from Asia, not Europe.

The findings support prior studies which found that Greenland Inuit dogs didn't have much European DNA, Sarah Brown, a researcher at the University of California at Davis, who was not involved in the study, wrote in an email.

"It is nice to see that another paper, using modern dogs, supports our findings based on both ancient DNA and modern DNA," Brown said.