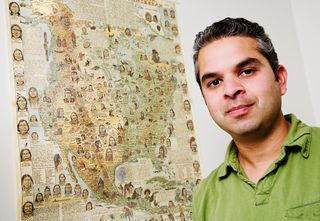 Ancient people who lived in in Northern America about 5,000 years ago have living descendants today, new research suggests.

Researchers reached that conclusion after comparing DNA from both fossil remains found on the northern coast of British Columbia, Canada, and from living people who belong to several First Nations tribes in the area.

The new results, published today (July 3) in the journal PLOS ONE, are consistent with nearby archaeological evidence suggesting a fairly continuous occupation of the region for the last 5,000 years. [History's 10 Most Overlooked Mysteries]

"We're finding links that tie maternal lineages from as far back as the mid-Holocene 5,000 years ago to living descendants living today in Native American communities," said study co-author Ripan Malhi, a molecular anthropologist at the University of Illinois at Urbana-Champaign.

Past research showed that almost all of today's Native Americans trace ancestry to six women who crossed the Bering Strait around 20,000 years ago. But getting a more detailed picture of history prior to colonization has proven difficult.

That's partly because after colonization, European men often mixed with Native American women, meaning DNA from the genome as a whole, and from the Y chromosome (the male sex chromosome), contained a significant fraction of European markers.

To get around this problem, Malhi and his colleagues chose to analyze mitochondrial DNA, which is carried within the egg and is passed on only through the maternal line. The team collected DNA from 60 currently living people from the Tsimshian, Haida and Nisga'a tribes on the northern coast of British Columbia.

They then compared those samples with mitochondrial DNA extracted from the teeth of four ancient individuals: a 6,000-year old and 5,500-year-old skeleton unearthed in a heap of shells (called a midden) near an ancient house from the Lucy Islands in British Columbia, and two ancient skeletons unearthed on Dodge Island, British Columbia that were 5,000 and 2,500-years-old, respectively. [In Photos: Ancient Egyptian Skeletons Unearthed]

The researchers found that three living individuals from the Tsimshian and Nisga'a tribes contained DNA that matched that from the older skeleton found in Dodge Island and that three of the skeletons matched to DNA from at least one living person. The oldest Lucy Island skeleton had DNA that didn't match living relatives, but did match a 10,300-year-old skeleton unearthed in On Your Knees Cave on Prince Wales Island, Alaska.

"What's particularly interesting about this paper is that the authors found two mitochondrial lineages in the Northwest Coast region in both the ancient individuals and modern people living in the area. This suggests that there's a long continuity of occupation of this region," Jennifer Raff, an anthropological genetcist at the Northwestern University in Illinois, who was not involved in the study, wrote in an email.

In addition, the fact that the people were found in a shell midden suggests the culture has been relatively continuous for the last 5,000 years. Up until the 1800s, Northwest coast tribes would build rectangular houses and throw their food waste — mostly seafood shells — in a shell midden next to the house, Malhi told LiveScience.

"The information is new and exciting, and it fits with everything that somebody who knows about Northwest coast history and culture knows," said Susan Marsden, a historian who works with First Nations groups and the curator of the Museum of Northern British Columbia.

Still, the genetic data could create a potentially misleading picture of a completely stable culture, Marsden, who was not involved in the study, told LiveScience.

In fact, these communities keep meticulously handed-down oral histories that serve in part to track matrilineal heritage, and those oral histories suggest further waves of migration into the region in the last 5,000 years, Marsden said.

For their part, Malhi and his colleagues, at the request of the tribes themselves, are doing further research to see how the genetic history of the region lines up with their oral histories.