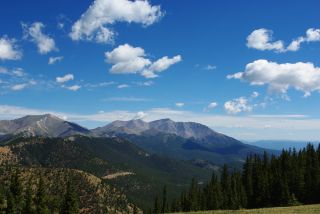 Meteorologists first conceived of seeding clouds as a way to increase rainfall in 1946, working at General Electric's laboratories in Schenectady, New York. But in the nearly 60 years since then, it has remained unclear whether human attempts to make it snow actually work.

Now, the results of the most scientific study of cloud seeding done yet are in. Researchers found that seeding clouds with droplets of silver iodide does slightly increase precipitation, boosting levels by 5 to 15 percent. However, experts disagree about whether this small increase means cloud-seeding efforts should expand.

In Western states, water providers, ski areas and power companies interested in hydroelectric generation have all injected silver iodide droplets into winter clouds for decades. In those areas, the winter snows that collect on mountain ranges provide upward of 70 percent of annual precipitation. The idea is that the droplets provide a nucleus within a cloud around which water can coalesce, forming snowflakes.

The problem, the report added, was "the absence of adequate understanding of critical atmospheric processes that, in turn, leads to a failure in producing predictable, detectable and verifiable results."

Researchers in Wyoming accepted the challenge of finding such verifiable results. They conducted a $14 million randomized blind statistical experiment that was designed and evaluated by the National Center for Atmospheric Research (NCAR). The primary laboratory consisted of two parallel mountain ranges, the Sierra Madre and Medicine Bow. During six winters, from 2008 into 2014, the researchers seeded storms that blew over both mountain ranges.

During any particular storm, researchers seeded the clouds over one range, with the other range serving as the control. To be eligible for seeding, the storms had to bring mountaintop temperatures to lower than 17 degrees Fahrenheit (minus 8 degrees Celsius), and the clouds needed to have super-cooled liquid water. In less scientific terms, the storms had to be moist.

Researchers had expected 60 to 70 storms each winter would meet these criteria. But far fewer that did, according to an executive summary of the report distributed Dec. 17 to the Wyoming Water Development Commission. Altogether, 118 storms were seeded and generated usable data.

The results showed no significant increase in precipitation from storms that were seeded.

So, cloud seeding is a dud? The report said no. Lacking the desired number of storms needed for a better statistical analysis of precipitation, the researchers turned to measuring cloud seeding's effect on variable infiltration capacity,  which is a measure of snowmelt-driven streamflow. This modeling yielded a more optimistic takeaway of a 5- to 15-percent increase in precipitation, the researchers reported at the conference of the Colorado River Water Users Association on Dec. 18 in Las Vegas.

But the real bottom line is that this is cheap water. NCAR estimated it would cost $35 to $107 per acre-feet of water in the North Platte River Basin if a 10 percent seeding effect affected 60 percent of the basin. Water in the basin has been marketed on a temporary basis for  $30 and $75 per acre-foot. At the headwaters of the Colorado River, near Vail and Breckenridge, water is valued at up to $40,000 per acre-foot.  In water, as in real estate, location matters entirely.

The results seem to have changed few minds. In listening to the findings, cloud-seeding supporters heard evidence that the method works, and those who were skeptical before remained skeptical.

"It confirms what we already thought," said Thomas Ryan, of the Metropolitan Water District of Southern California, a consortium that delivers drinking water to 19 million people. Cloud seeding is just one tool for getting more water to a population, but an inexpensive one, he said.

But Brad Udall, from the Colorado Water Institute, said he was unimpressed. "It's in the modeling that they get these higher numbers of 10 to 15 percent," he said. "These statistics still aren't very good." Like the other observers, though, he conceded that cloud seeding is a low-risk venture, producing inexpensive water if it has even a small effect. But he said the technique was unlikely to make much difference except on the margins.

But the bureau conducted a meeting of Western water stakeholders in Denver this November to "get our arms around what constitutes good science at this point," said Dan Raff, the bureau's science advisor.

The meeting did not, he said, come in response to declining reservoirs on the Colorado River, but rather due to an "interest in having as much water supply as possible." However, the agency did invest $200,000 in seeding clouds in the Wind River Range of Wyoming. To the extent the seeding succeeds, Las Vegas, Phoenix and Los Angeles will benefit.