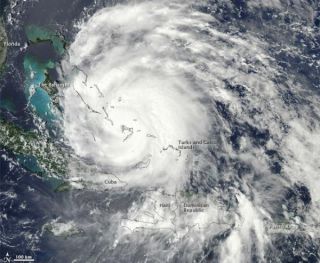 Hurricane Irene, which pummeled the East Coast of the United States from North Carolina to New England this year.
(Image: © NASA)

SAN FRANCISCO — Seeding clouds with saltwater spray in select regions of the globe could reduce the strength of some hurricanes and possibly prevent others from forming, a new study suggests.

The basic idea is to brighten marine clouds above the tropical Atlantic Ocean by pumping tiny salt particles into them. Brighter clouds reflect more sunlight into space, so the geoengineering effort could lower ocean temperatures and thus throw a wrench into the engine that sends hurricanes churning toward the Caribbean and the southeastern United States every summer, researchers said.

"The sea surface temperatures will respond, and that could reduce the category of the storm," said study co-author Alan Gadian of the University of Leeds in the United Kingdom, who presented the work here last Thursday (Dec. 8) at the annual meeting of the American Geophysical Union (AGU).

Cloud seeding is a fairly established practice, but the intent is usually to spur or suppress precipitation. China employed the technique in 2008, for example, in an attempt to prevent rain from marring the opening and closing ceremonies of the Beijing Olympics.

Cloud seeding also may have potential to slow the pace of global warming, according to Gadian and his colleagues.

The researchers have argued that injecting tiny sea-spray particles into marine stratocumulus clouds near the equator could help cool down the Earth. If they're the right size, the particles would increase the clouds' reflectivity and more sunlight would bounce off them and back into space.

The effects could be particularly profound at the poles, which most scientists say are getting hit hardest by climate change.

"If you want to cool the poles, you cool the equator regions," Gadian told OurAmazingPlanet."Because the atmosphere and oceans, the whole role of them is to take heat from the equator to the poles."

Reducing the power of hurricanes

Because hurricanes draw their strength from warm ocean waters, many scientists have predicted that the storms will become more powerful as the planet continues to heat up.

But cloud-brightening could conceivably help tackle this problem, too, by reducing ocean temperatures in the regions where hurricanes are born. In the new study, the team — led by John Latham of the University Corporation for Atmospheric Research in Boulder, Colo. — looked into this possibility using computer simulations.

The researchers found that seeding marine stratocumulus clouds in the tropical and subtropical Atlantic could potentially have a big impact. [Photos: Hurricanes From Above]

The intensity of some hurricanes could be reduced by a full category, for example, Gadian said. (Meteorologists classify hurricanes into five categories based on their wind speeds and other characteristics, with Category 1 being the weakest and Category 5 the strongest.)

Further, the reduced sea surface temperatures would likely prevent some hurricanes from forming at all, researchers said.

The team's studies highlight the potential of cloud-brightening as a tool to help stave off the worst effects of climate change, researchers said. But the extent of that potential is hard to gauge, because cloud-brightening hasn't been tested in the real world yet.

The researchers want to change that. They hope to stage a cloud-brightening experiment in the near future, using ships to inject sea-spray particles into clouds over a stretch of ocean measuring 62-miles (100-kilometers) square.

The goal of this next step wouldn't be to cool sea surface temperatures appreciably. Rather, researchers want to make sure they have a firm grasp on the technology — how big the particles should be, how best to inject them, how the clouds respond and so forth.

"A field experiment could potentially provide really important information for understanding aerosol indirect effects, one of the largest sources of uncertainty in future climate warming," said team member Robert Wood of the University of Washington, who spoke about the proposed experiment during a talk here at the AGU meeting Dec. 8.

"It's an experiment that actually has a lot of potential for understanding geoengineering," Wood added.

The researchers stressed that cloud-brightening is not a solution to the problem of global warming, which is not going to go away as long as we keep pumping greenhouse gases into the atmosphere.

"It's not going to solve the problem," Gadian said. "It might buy you a little time."