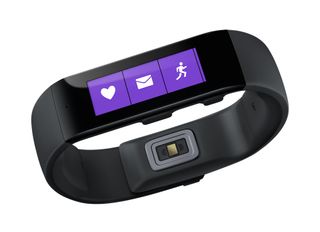 The Microsoft Band is a wrist-worn fitness tracker designed for people who want to track data from their workouts while also having email, texts and other reminders available with a glance to their arm. The GPS-enabled device tracks your heart rate, steps taken, calories burned and the quality of your sleep, and also offers a guided workout feature. It pairs with the Microsoft Health app, which runs on iPhone, Android or Windows phones. At $199.99, the Band is more expensive than the Withings Pulse 02 and the Fitbit Charge HR (available in early 2015), which also track heart rate and cost about $120 and $150, respectively. But Band's cost is comparable to the Adidas miCoach Fit Smart (about $190 on Amazon), which also has a built-in heart rate monitor, but does not alert you about emails or texts.

What sets the Band apart from other fitness trackers is its smartwatch capabilities— email, texts and calendar alerts (as well as the digital personal assistant program called Cortana, which is available on Windows phones). But despite these bells and whistles, the manufacturer seemed to come up short on a basic requirement: comfort. I tested out the Band for a week, and here's what I found.

The advantages of the Band are the convenience of viewing emails, texts and other alerts on your wrist, combined with a slew of sensors including GPS and a built-in heart rate monitor. The disadvantages are that it's uncomfortable to wear, isn't waterproof and has a screen that makes it difficult to read longer messages.

The Band comes in three sizes (small, medium and large), and has an adjustable-fit clasp. The device fit fairly snugly on my wrist, but the hard plastic strap and rigid screen made it pretty uncomfortable to wear for extended periods of time. The band is dust- and splash-resistant, but not waterproof, so you can't wear it while swimming. [Best Fitness Tracker Bands]

The Band's display screen is a rectangular touch screen, measuring 11 x 33 millimeters (0.4 x 1.3 inches), with a resolution of 320 x 106 pixels. You basically have to wear it with the screen facing the palm side of your wrist; if you wear the device on the back of your wrist, you have to twist your arm awkwardly or crane your neck to read the display. I found this uncomfortable when I was sleeping or typing.

If you enable notification alerts,the Band can display incoming calls, emails, texts, Tweets or other updates, and has a small motor that vibrates to alert you.I did this, on my iPhone, by enabling each app to "Show in Notification Center" in the phone settings. It was easy to turn the push notifications on and off whenever I wanted to.

Alongside the touch screen are two buttons, the power and action buttons. Pressing the power button, centered beneath the display, will wake up or turn off the display, and pressing and holding it powers the device on and off. Pressing the action button, below and to the right of the screen, lets you toggle through the choices on the screen and select the one you want. For example, you use this button to start or stop a run, or turn the heart rate monitor on or off.

The battery normally lasts 48 hours, but it needs to be charged sooner than that if you turn on the GPS function, or other advanced features. The device charges via USB, and the stated charge time is less than 1.5 hours, whichis about what I found when using the device.

The Band connects via Bluetoothwith the Windows Phone 8.1; iPhone 4S, 5, 5C, 5S, 6 and 6 Plus; and Android 4.3-4.4 phones. You will need a Microsoft account to use your device, but you can sign up for one if you don't already have one.

When you first log in, you'll be prompted to give your Band a name and choose a color theme and wallpaper.

The heart rate monitor and GPS features were useful — I ran a 5-mile (8 kilometers) race with the device, and afterward I found it helpful to see my average pace, average heart rate and ending heart rate, among other metrics. People who are interested in losing weight or maintaining weight loss may find the calorie-counting feature helpful. I'm not sure how much I would use the other features, especially sleep tracking, since the device was uncomfortable to wear while sleeping.

Getting the notifications about emails and texts right on the screen was useful because it meant I knew about them even when I wasn't right next to my phone. But actually reading the messages, especially longer emails, on the tiny screen was difficult. Also, once a message is pushed to your Band, there's no way to delete the message from the Band, even if you delete it from your phone. And you can't reply to messages directly from the Band, unless you're using Cortana with a Windows phone.

I initially had some trouble pairing the device with my iPhone — the Bluetooth wasn't able to establish a connection right away. But I was able to get it up and running after a few tries, and after that it synced automatically.

The Microsoft Health app is fairly easy to navigate. The home screen displays basic information about your workout, sleep, notifications, etc., and you can customize how information is displayed on your Band by managing "tiles."

Overall, I found the health-tracking features to be useful, and the notifications were kind of novel, but for people looking for a fitness tracker to track the basic data from workouts, the Band's higher price may not be worth it, and its uncomfortable design may mean there are better options. For those who have a Windows phone, I imagine that having access to Cortana could make the device more useful.

The tracker offers several ways to tailor your goals and workouts based on your own preferences. It was easy to navigate through the app to customize a workout: You go to the Find a Workout menu in the Health app, and then you can browse through the options. This could be a useful feature, especially for people (like me) who perform best with someone coaching them. On the Health app, you can adjust your targets for daily number of steps and calories burned to suit your own goals, and the app will tell you if you've met them.

You can see on the app which times of day you were most active, and you can download pre-designed workouts (such as "Train for a Half-Marathon in 8 weeks" or my personal favorite, "Fast-Track Your Pecs").

The Microsoft Band was fairly enjoyable to use, but didn't feel as comfortable to wear as some other GPS watches, such as the TomTom Runner Cardio.

The Band can share information with apps like RunKeeper and myfitnesspal. As a nifty perk, you can pay for your Starbucks purchases using your Band, though it's not marketed as a payment device like Apple Pay.

All in all, the Band seems like a promising device, but in practice, I found it didn't quite live up to its potential as either a fitness tracker or a smartwatch. Also, I couldn't get past it being uncomfortable to wear for long periods.

Microsoft Band
Amazon
$3.76
View
We check over 130 million products every day for the best prices
View All Deals