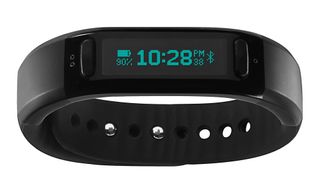 The Go is a new fitness tracker from watch maker Soleus, and it tracks many of the standard metrics seen in fitness trackers today, including your daily steps, calories burned, distanced traveled and how much you sleep. But unlike some fitness trackers, the Go also tracks your workout time and pace, and it includes a few smartwatch features, such as alerts when you get a call or text, and even shows you the weather.

At $80 to $110, the Go is in the middle of the price range for fitness trackers. Here's what I found after testing the device for a week.

The pros of the Go include vibration alerts that remind you to move, the ability to receive alerts for incoming calls and texts, the ability to track workout times right on the device and the option to set the device to automatically enter sleep mode.

The cons of the device include a lack of information about what your stats mean, a cumbersome charging device and the need to press buttons multiple times to find certain information, such as your daily steps.

The Go is designed to be worn on the wrist, and it has an adjustable silicone strap. The Go fit me quite well, but it was a little difficult to put on at first — I initially had trouble snapping the clasp, but this became easier over time. Also, there is only one way to wear the Go: as a wristband. It cannot be worn like a pedometer (i.e., clipped on your belt or clothes near your waist).

The digital OLED display is bright and easy to read. The device has two navigation buttons on either side of the screen — one button that you press to see the time of day and your stats, and another button that allows you to cycle through the various modes of the device, showing you the time you've spent exercising, sleeping, etc.

A neat feature of the device is that it can vibrate to remind you to get up and move when you have been idle for too long. You can set the amount of time (such as 45 minutes) that the Go will let you sit before it buzzes you. The vibrate feature also serves as an alarm to wake you up in the morning.

The Go comes with its own charger, which I found somewhat difficult and cumbersome to use. The charger prongs align with metal pads on the back of the device, but the only way to get the charger to stay in place is to wrap an attached band around the Go, and clip it into place. You then have to connect the charger by a USB cable to your computer. I found that even a slight misalignment of the charger prongs would cause the device to stop charging. On the plus side, once you get the device charged, the battery should last seven days (and the device I tested still had some battery power left after a week).

Although the device tracks workouts, it does not have a heart-rate monitor. It is also not waterproof — it cannot be used to track swimming, and the company does not recommend wearing it while bathing or showering.

The Go and its accompanying app are fairly easy to use. The device even stores a 30-day history of your activity on the device itself, so you don't necessarily need a smartphone to see your progress over time (although it helps to have one).

Within the Go App, you'll see a quick summary of your stats, as well as a circle that fills up with color (going from red to green) as you become more active — like a car speedometer. This is an easy way to see at a glance how much more activity you need to complete your daily goal. The app also has sections to show you more information about your activities, such as what time of day you were most active, and when you were in deep sleep versus light sleep.

However, on the device itself, the Go display does not turn on unless you press one of the display buttons, which is difficult if your hands are full, or if you're on a jog. What's more, I found that I needed to push the navigation buttons multiple times to find the information I wanted. For example, pressing the button on the right side of the screen once shows the time and how much battery life you have. Pressing the button a second time shows the date. It's not until the third press that you see one of your stats — how many calories you've burned. If you want to see the number of steps you've taken that day, you have to press the button five times. Many people buy fitness trackers to count their daily steps, so I think this information should not be so buried.

To switch modes, you push the button on the left side of the screen until you get to the mode you want (such as sleep tracking). Then, you hold down the button until you see the words Hold Start. Once you release the button, the device will enter the new mode (for example, sleep mode will start). This process is fairly straightforward, but it's still more steps than other devices require to start tracking in a given mode.

One feature I liked is that you can tell the Go to automatically enter sleep mode at a certain time — say, 10:30 p.m. This way, you don't have to remember to put the device into sleep mode. And since many people go to bed at the same time each night, it seems logical. With other devices that track sleep, such as the Jawbone UP24 and the Withings Pulse O2, users have to put the device into sleep mode each night. (The Basis Carbon Steel fitness tracker claims to be able to tell when you are sleeping without needing to set the device to sleep mode, but I found that it sometimes made mistakes.)

One problem I found with the device is, if you have it set to enter sleep mode manually, but you forget to actually put it into sleep mode, the vibrations that alert you that it's time to move will go off in the middle of the night (because it thinks you are not active). This will likely wake you up.

Although the Go tracks your activity, it provides virtually no information to explain what your numbers mean. For example, the Go does not tell you how much activity you need to be healthy, or how much sleep you should aim for. Nor does it explain how it determines whether you are in deep sleep versus light sleep, or how much you should expect to get of each. The Go seems to be intended for people who are already active, or who have a good idea about what they want their goals to be.

The alerts that let you know you are getting a call or text seemed redundant at times (the watch and your phone go off at the same time), but there were a few situations where I found the alerts useful. For example, when I was washing the dishes, I could see on my wrist that I had a call coming in and could immediately run to pick up the phone.

The Go's vibration alerts that remind you to move are a good way to make sure you don't sit too long. The physical vibrations are also impossible to miss. (The Garmin Vivofit displays a red line to remind you to move, but if you don't look at your wrist, you might miss this alert.)

However, the device provides little else in the form of motivation — it does not send push notifications about your progress or goals to your phone, for example. There are also no awards or badges for when you meet your goals. In comparison, the Nike+ Fuelband rewards your progress with Fuelpoints.. The Go did tell me to "smile" when I completed my goal, though.