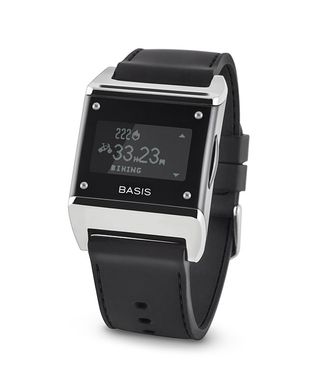 Compared to some other trackers, the pros of the Basis include the screen/watch on the device itself, the inclusion of a heart-rate monitor and a feature called Habits that is intended to motivate you to be healthier by accomplishing set goals.

The cons of the Basis include its large size, a lack of a way to monitor calorie intake and occasional errors with the time you are asleep.

One of the main differences between the original Basis and the new edition is visual: The new band definitely has a sleeker look. It has a silicone strap, which is more flexible, and feels softer, than the rubber/plastic strap on the original version. And the strap connections — where the strap attaches to the tracker face — are now a shiny chrome color.

The band is aesthetically pleasing, and the new strap feels more comfortable against the skin. However, when I first strapped on the tracker, the chrome connections (which felt a little heavy) started to dig into my skin, and left marks after a little while. Ouch. I thought I had chosen the right size setting, but I had to wear the tracker a bit lose to prevent this problem.

The tracker face itself is still the same size as the original, which is quite large. This makes for an easy-to-see watch, but also makes it hard to pull a sweater on or off while wearing it.

The Carbon Steel Edition is just as user-friendly as the original Basis B1. The tracker can automatically detect when you are running, walking or cycling. I thought this was neat — after a short walk, the tracker screen will show you how long you've been walking, and how many calories you burned during the walk. This timer stops if you stop walking, and picks up again when you resume, keeping track of your total walking time.

Like the original, the Carbon Steel Edition doesn't have a sleep mode, and automatically detects when you're sleeping. This feature is appealing — it's one less thing to remember. However, I was disappointed that, despite touting a new sleep-analysis feature, the Carbon Steel Edition still made a few mistakes about when I was sleeping. Once, it said I was sleeping for 30 minutes, when I was actually watching a movie. And another time, it said I was asleep at work, when I was actually sifting through my inbox. To me, these occasional errors are a downside to not having a way to tell the device when to enter sleep mode.

Still, the Carbon Steel has all the user-friendly features of the original, including a Web app, where the user's data is presented in fun and interesting ways. (See our Basis B1 Review for a recap of these features.) In the Data section of the Web app, users can now view more details about their sleep as part of the new sleep-analysis feature. An easy-to-understand chart shows time spent in light sleep, deep sleep and REM sleep, as well as the number of times you tossed/turned, and when your sleep was interrupted. You're also given a sleep score, which is meant to reflect how well you slept on a scale of 0 to 100.

I applaud Basis for continuing to provide explanations for some of the metrics it tracks, which give these metrics a value beyond just a number. For example, in addition to tracking the stages of sleep, Basis provides an explanation for what each phase of sleep means, why it's important and how much time a person typically spends in each stage. Basis also tells you how much daily activity is recommended by the Surgeon General, and how much sleep you should aim for.

Overall, the Basis is enjoyable and motivating to use. A big part of the motivation to keep using the tracker comes from the inclusion of a point system, in which users get points by completing "habits" (such as taking a walk every morning). As you collect more points, you can "unlock" more habits.