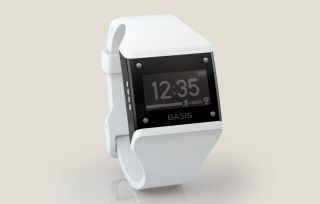 The Basis B1 is an activity tracker that's marketed as a device that helps busy people fit exercise into their everyday lives. BUY Basis B1>>>
(Image: © Basis)
Basis B1
Amazon
$26.79
View
We check over 130 million products every day for the best prices

The Basis B1 is an activity tracker that's marketed as a device that helps busy people fit exercise into their everyday lives. A distinguishing feature of the Basis is that it includes a heart-rate monitor. The device also tracks more standard measures like steps taken, calories burned, distance walked and sleep. With a price tag ranging from $169.99 to $199.99, the Basis is one of the more expensive activity trackers on the market, with a higher price than the Fitbit Force ($129.95) and the Withings Pulse ($99.95, which also includes a heart monitor). Is the Basis worth the extra bucks? I tested the device for a week to find out. (Our review of the Basis B1 Carbon Steel Edition is coming soon).

The pros of the Basis include the screen interface on the device itself, the inclusion of a heart-rate monitor and a feature called Habits that is intended to motivate you to be healthier by accomplishing set goals.

The cons of the Basis include its large size, a lack of a way to monitor calorie intake and occasional glitches when syncing.

The Basis looks like a digital wristwatch. It has an adjustable strap, which allows for a snug fit, and a screen, which displays the time and activity measures, including steps taken, calories burned, distance walked, time spent walking and heart rate. (Pressing one of the front buttons will make the screen cycle through these measures). A neat feature of the device is that the screen's backlight will shine when you twist your wrist to look down at the screen — meaning this light shines just when you need it to.

Unfortunately, the Basis is a bit bulky, and there is only one size. There were times when I had to remove the device in order to take off a coat or long-sleeved shirt because the device got stuck in the sleeve. My guess is that the device needs to be a certain size in order to accommodate its heart-rate monitor and other sensors (including those that detect skin temperature and perspiration). Still, the device looked big on me, and being a petite female, I couldn't help but think that the device would be better suited (and perhaps more appealing) for an average-size male.

The Basis is pretty user-friendly. The screen on the device itself allows users to see how they're doing at any given moment, so they don't have to upload or sync their data with a smartphone and open an app.

To view more details about your data, you can either download the Basis software and use the provided USB cable to sync the device to your computer, or sync the device wirelessly to your smartphone, and view your data on the Android or iOS app.

The Basis tries to get you to be healthier by having you complete goals it calls "habits," which you select when you log in to your account. For example, if you chose the habit "Don't be a sitter,"    you needto get up at least once each hour between 9 a.m. and 5 p.m. for a few days to complete the goal. The basis web app is easy to navigate, placing information into three sections: Habits, Insights and Data.

In the Insights and Data sections, your metrics are presented in fun and interesting ways. For example, in the Insights section, a chart shows your activity throughout the day, with bars representing your activity level. You can also view your heart rate, skin temperature and perspiration data on the same chart, allowing you to see the points in time when these measures changed, and how the changes correlate with your activity.

The Data section shows patterns of activity: It divides a day into blocks of time, and the blocks are shaded different colors, with darker shades representing more intense activity (for example, higher heart rate). Over time, patterns may start to emerge in your data (periods of darker or lighter colors), which you can see at a glance.

You don't have to put the Basis in sleep mode; it detects when you're sleeping automatically. This could be seen as an advantage over other trackers, which have to be told to go into sleep mode, but it did sometimes lead to problems. One morning, the device thought I was sleeping when I was at work (though I was wide awake at my desk, reading emails).

I also had some problems syncing the Basis with my computer, and was not always able to sync on the first try. And when the device did sync, I had to wait a little while before the new data would show up in my Basis account.

Through its Habits feature, the Basis provides added value beyond some of the information it tracks. For instance, the section that describes physical-activity habits says "According to the Surgeon General, we need to take at least 10,000 steps a day (the equivalent of 30 minutes of activity)." And in the section that describes sleep habits, it says that the recommended daily amount of sleep is 7.5 to 9 hours.

But the Basis does not explain all of the measures it tracks. Despite including a fancy heart monitor, there is no explanation of what your heart rate might tell you about your health. [New Heart Rate Trackers: Is Knowing Your Pulse Useful?] This may have been purposeful, as the Basis is not intended to diagnose medical problems that might be related to heart rate. But I thought that the company could have included some general information about heart rate, such as why it might be useful to know your heart rate during exercise, or how the heart rate fluctuates naturally during the day in response to stress and activity.

There is also no explanation about skin temperature or perspiration data. For me, these two measures changed very little during the day, which made me wonder whether it was useful to collect this data.

The Basis also does not have a way to track how many calories you've eaten during the day.

Despite some flaws, I did really enjoy using the Basis. I've tested quite a few different activity trackers in recent months, and I can honesty say that the Basis is the only one I wanted to keep using. The Basis is motivating: It provides you with points when you complete a habit, and you cannot start (or "unlock") a new habit unless you have enough points for that habit. The "Don't be a sitter" habit really did get me out of my chair at the office, and made me aware of just how long I usually go without moving. I wanted to keep on using the device so I could unlock more habits.

Basis B1
Amazon
$26.79
View
We check over 130 million products every day for the best prices