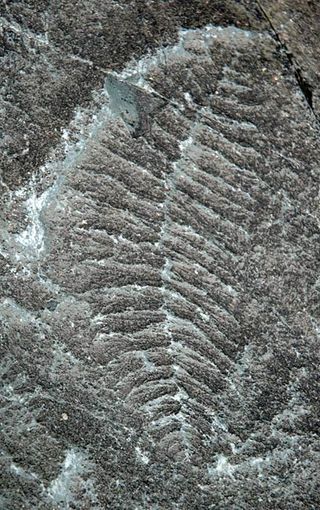 A 565-million-year-old fossil from Newfoundland, Canada known as Fractofusus andersoni. This Ediacaran creature is among the earliest of the period and may have evolved following an "explosion" in biodiversity about 575 million years ago - 33 million years before the larger, better-known Cambrian explosion.
(Image: © Bing Shen, Virginia Polytechnic Institute and State University)

Complex life on Earth may have blossomed during two "explosions," not one, a new study suggests.

“It now appears that at the dawn of the macroscopic life, between 575 and 520 million years ago, there was not one, but at least two major episodes of abrupt morphological expansion," said Shuhai Xiao, a paleontologist at Virginia Tech.

The new study, detailed in the Jan. 4 issue of the journal Science, examines life during Ediacaran Period on Earth, between 635 million years and 542 million years ago. The authors compared 200 different species to reveal that their body types — and richness of diversity — appeared at around the same time.

Despite the first boost in diversity, however, the Ediacaran creatures all but vanished before the Cambrian explosion that followed.

"The Avalon explosion represents an independent, failed experiment with an evolutionary pattern similar to that of the Cambrian explosion," the authors said.