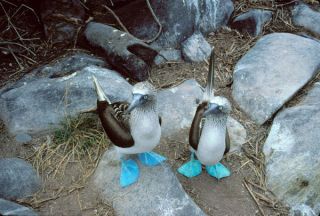 Boobies were a species of bird that Charles Darwin found on the Galapagos Islands.

From bizarre butterfly spots to rainbow-colored lizards to adaptations that allow squirrels and even snakes to "fly," physical innovations in the natural world can be mind-boggling.

"I think one of the greatest mysteries in biology at the moment is whether natural selection is the only process capable of generating organismal complexity," said Massimo Pigliucci of the Department of Ecology and Evolution at Stony Brook University in New York, "or whether there are other properties of matter that also come into play. I suspect the latter will turn out to be true."

Some scientists are proposing additions to the list of evolutionary forces.

"Over the past decade or two, scientists have begun to suspect that there are other properties of complex systems (such as living organisms) that may help, together with natural selection, explain how things such as eyes, bacterial flagella, wings and turtle shells evolve," Pigliucci told LiveScience.

One idea is that organisms are equipped with the flexibility to change their physical or other features during development to accommodate environmental changes, a phenomenon called phenotypic plasticity.

The change typically doesn't show up in the genes. For instance, in social bees, both the workers and guards have the same genomes but different genes get activated to give them distinct behaviors and appearances. Environmental factors, such as temperature and embryonic diet, prompt genetic activity that ends up casting one bee a worker and the other a guard.

If beneficial, this flexibility could be passed on to offspring and so can lead to the evolution of new features in a species. "This plasticity is heritable, and natural selection can favor different kinds of plasticity, depending on the range of environmental conditions the organism encounters," Pigliucci said.

Self-organization is another evolutionary force that some experts say whips up complex features or behaviors spontaneously in living and non-living matter, and these traits are passed on to offspring through the generations.

"A classic example outside of biology are hurricanes: These are not random air movements at all, but highly organized atmospheric structures that arise spontaneously given the appropriate environmental conditions," Pigliucci said. "There is increasing evidence that living organisms generate some of their complexity during development in an analogous manner."

A biological illustration of self-organization is protein-folding. A lengthy necklace of amino acids bends, twists and folds into a three-dimensional protein, whose shape determines the protein's function. A protein made up of just 100 amino acids could take on an endless number (billions upon billions) of shapes. While this shape-shifting takes on the order of seconds to minutes in nature, the fastest computers don't have the muscle yet to pull off the feat.

The mechanism that triggers the final form could be a chemical signal, for instance.

The environment also could drive changes in an animal's appearance or phenotype, a phenomenon that intrigues many biologists.

For instance, Sean Carroll, a molecular biologist at the University of Wisconsin-Madison, discovered butterflies in East Africa have different colorings depending on when they hatch. Those hatching during the wet season emerge with brightly colored eyespots while their dry-season relatives wear neutral cryptic coats.

Biology has a pretty good understanding of how animals develop from a fertilized egg to a fully formed organism.

"We just don't understand how … the environment and [the] genetic blueprint interact during development," said Theunis Piersma of the Center for Ecological and Evolutionary Studies at the University of Groningen in the Netherlands.

Piersma's research on shorebirds called red knots has revealed the birds can morph their phenotypes depending on their migration routes.

When brought into captivity and placed in colder temperature environments, the shorebirds' flight muscles and organs shrink to reduce heat loss. The birds pass on to offspring the capacity to make these changes.

So the mystery is starting to clear around how diverse species with an array of features evolve. The field, which had relied in the past mostly on fossil records, got a boost with the development of genetic techniques and the integration of diverse sectors of science, connecting genetics, biology, ecology and computer science.

While scientists are shedding light on natural mechanisms that work to shape species, many questions in the field are brewing on the lab-bench. And the original question examined by Charles Darwin—what is the mechanism that causes new species to evolve—has yet to be fully explained. And another related question looms: How important are chance events, as opposed to natural selection, to shaping organisms?