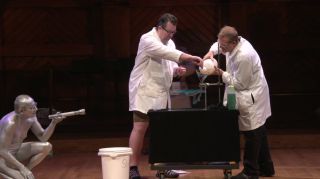 During a science break for the 2014 Ig Nobel Awards ceremony on Sept. 18, presenters create a gelatin substance while a "human sparkplug" looks on.
(Image: © Ig Nobels, Screengrab)

CAMBRIDGE, Mass. — The brilliant minds behind research studies about how Earth's magnetic field affects pooping dogs and why people see Jesus in toast were honored tonight (Sept. 18) during one of the most purposefully ridiculous ceremonies in all of science: the Ig Nobel Prizes.

Each year, the Ig Nobel Prizes (a parody of the somewhat more famous Nobel Prizes) are awarded to scientists whose research "makes people laugh and then think." Improbable Research, the organization that awards the prizes, runs the annual ceremony here at Harvard University's Sanders Theater.

And what a ceremony it was. Two "human sparkplugs" dressed in little more than silver body paint were welcomed on stage to usher speakers to the microphone, and paper airplanes flew through the theater on more than one occasion. But the food-themed night was truly about honoring science and the scientists who do it. [See all of the 2014 Ig Nobel Prize Winners: Banana Peels to Nasal Pork]

"The achievements speak for themselves all too eloquently," Master of Ceremonies Marc Abrahams said during tonight's Ig Nobel presentations.

At first blush, most of the research featured during the ceremony seems frivolous, but upon further inspection, what's fun on the surface actually has a more important, scientific meaning. For example, this year's prize in Arctic science went to a group of researchers who dressed up like polar bears to see how reindeer in Norway would react compared with their reactions to humans. [The 12 Weirdest Animal Discoveries]

While this polar bear research might seem ridiculous at first glance, it is actually related to climate change science. Because polar bears are getting stuck on landmasses later and later in the year due to melted sea ice, the scientists wanted to see how reindeer populations reacted to polar bears (or what the animals perceived to be polar bears) and compare it with the way they behave around humans. (The reindeer were much more calm when the humans just looked like humans.)

The Ig Nobel in Medicine went to doctors who used cured pork to stop a young child's "one-in-a-million bleeding disorder." While they tried many different technical and even expensive methods to stop the bleeding, the team of doctors eventually turned to an old-time cure: They stopped the bleeding by packing the patient's nose with strips of cured pork.

"They say bacon makes everything better," Children's Hospital of Michigan's Sonal Saraiya, one of the Medicine prizewinners, told Live Science before the ceremony.

Other scientists were awarded for research that found dogs align themselves along Earth's magnetic field lines while pooping, and the Neuroscience Prize went to a team of scientists who found out how common it is for humans to see faces in random images that didn't really show faces. The phenomenon called face pareidolia is responsible for turning a normal piece of toast into an image of Jesus' face and a rocky Martian landform into a face.

One of the winners either didn't want to show up or couldn't make it to the ceremony. The prize in economics was given to the Italian government's National Institute of Statistics "for proudly taking the lead in fulfilling the European Union mandate for each country to increase the official size of its national economy by including revenues from prostitution, illegal drug sales, smuggling and all other unlawful financial transactions between willing participants," according to Ig Nobel representatives.

This year's First Annual Ig Nobel Prize Ceremony (which is actually the 24th year the prizes have been awarded) also featured actual Nobel laureates who helped hand out the 10 prizes to the 2014 Ig Nobel winners.

A group of invited speakers also gave a series of short, somewhat silly speeches. In keeping with the food-themed evening, the inventor of the all-in-one food Soylent gave a 24-second technical talk on metabolism and then summed it up with seven words.

"Thanks to enzymes, humans are solar powered," Soylent developer Rob Rhinehart said during the event.

Last year's Ig Nobel prizes paid respect to some truly funny research as well. The 2013 Joint Prize in Biology and Astronomy was awarded to a group of scientists who found that dung beetles find their way home by looking at the Milky Way if they are lost. (But first, the beetles do a dance on their rolled balls of dung.)

"If you didn't win an Ig Nobel Prize tonight and especially if you did, better luck next year," Abrahams said at the end of the ceremony.