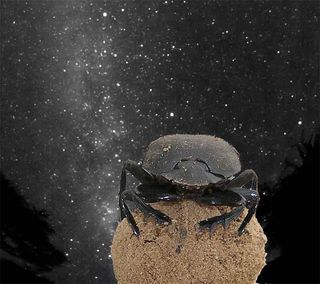 Dung beetles use the glow of the Milky Way galaxy to navigate.
(Image: © Emily Baird)

Despite having tiny brains, dung beetles are surprisingly decent navigators, able to follow straight paths as they roll poo balls they've collected away from a dung source. But it seems the insects' abilities are more remarkable than previously believed. Like ancient seafarers, dung beetles can navigate using the starry sky and the glow from the Milky Way, new research shows.

"This is the first time where we see animals using the Milky Way for orientation," said lead researcher Marie Dacke, a biologist at Lund University in Sweden. "It's also the first time we see that insects can use the stars."

After locating a fresh pile of feces, dung beetles will often collect and roll away a large piece of spherical dung. Last year, Dacke and her colleagues discovered the beetles climb on their dung balls and dance around in circles before taking off. This dance is not one of joy, however; the insects are checking out the sky to get their bearings.

"The dorsal (upper) parts of the dung beetles' eyes are specialized to be able to analyze the direction of light polarization — the direction that light vibrates in," Dacke told LiveScience. So when a beetle looks up, it's taking in the sun, the moon and the pattern of ambient polarized light. These celestial cues help the beetle avoid accidentally circling back to the poo pile, where other beetles may try to steal its food, Dacke said. [Photos of Dung Beetles Dancing on Poop Balls]

In addition to these cues, Dacke and her team wondered if dung beetles can use stars for navigation, just as birds, seals and humans do. After all, they reasoned, dung beetles can somehow keep straight on clear, moonless nights.

To find out, the researchers timed how long dung beetles of the species Scarabaeus satyrus took to cross a circular arena with high walls blocking views of treetops and other landmarks. They tested the insects in South Africa under a moonlit sky, a moonless sky and an overcast sky. In some trials, the beetles were fitted with cardboard caps, which kept their eyes to the ground. Overall, the beetles had a difficult time traveling straight and took significantly longer to cross the arena if caps or clouds obstructed their view of the sky.

From the experiments, "we thought that they could be using the stars [for orientation], but dung beetles have such small eyes that they don't have the resolution, or sensitivity, to see individual stars," Dacke said.

So the researchers moved their setup into a planetarium to tease out the information the beetles were extracting from the starry sky. They repeated the experiment under several different conditions, such as showing only the brightest stars, showing only the diffuse band of the Milky Way and showing the complete starry sky. The beetles took about the same amount of time to cross the arena when only the Milky Way was visible as when they could see a full star-filled sky. And they were slower to cross under all other conditions.

Previous experiments showed another dung beetle, S. zambesianus, is unable to roll along straight tracks on moonless nights when Earth's galaxy, the Milky Way, lies below the horizon, Dacke noted. Taken together, these results suggest dung beetles navigate using the gradient of light provided by the Milky Way. However, this technique would only work for beetles living in regions where the Milky Wayis distinct. "What they are doing in the Northern Hemisphere [of Earth], I don't know," she said.

The researchers are now trying to determine the relative importance of the different sky cues dung beetles use. "If they have the moon, polarized light and the Milky Way, will they use all cues equally?" Dacke said.

The research is published online today (Jan. 24) in the journal Current Biology.