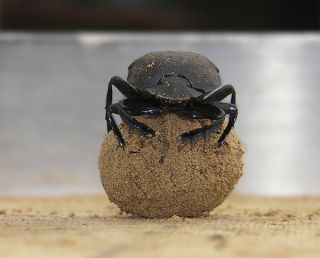 Dung beetles dance on top of balls of poo to help them navigate away from rivals as fast as possible, scientists find.

Dung beetles roll up balls of dung to feed their young. Strangely, they routinely climb on top of these balls and dance around in circles on them, a mystery that neuroethologist Emily Baird at Lund University in Sweden and her colleagues wanted to solve.

"My research interest lies in understanding how animals with small brains, and therefore relatively limited processing power, are capable of orienting and navigating through the world," Baird told LiveScience. "Our aim is to understand the techniques and mechanisms that animals such as insects use to overcome the limitations of their small brain."

To find out why these beetles apparently dance jigs, the researchers experimented with the diurnal ball-rolling dung beetle, Scarabaeus (Kheper) nigroaeneus,on a farm in South Africa. They were placed in bins filled with soil, where they could make and roll balls of fresh cow dung.

"We are very fortunate that the dung beetles are such wonderful animals to work with," Baird said. "Even when we place them in the most unusual experimental situations, these wonderful animals just continue to behave as normal."

Dung beetles typically roll away from dung piles in straight lines — a remarkable feat, given they do this facing backward with their head pointing toward the ground. These straight lines help ensure they get away as quickly as possible from other beetles that, rather than making their own ball, would prefer to steal those of others. [Photos: Shimmering Metallic Beetles]

They found that the dung beetles often danced before moving away from dung piles, upon encountering obstacles, or if they lost control of the balls. This suggested the insects danced to orient themselves.

The researchers then had the dung beetles roll balls into tunnels, and spun these tunnels (tubes) around so the beetles ended up moving the direction opposite to that in which they had started. About half of the beetles danced and corrected their course back to their original direction. However, when the tunnels were covered with black paper that prevented the beetles from seeing the sky or any landmarks, only 14 percent danced and none of them corrected their direction, suggesting they relied on visual cues to orient themselves during their dances.

In a final experiment, the researchers had the beetles roll balls into a clear tunnel, and once they reached the center, a wooden board hid the sun from the beetle's view while a mirror was used to reflect the image of the sun so that it was in the opposite part of the sky from where it was originally. After the apparent position of the sun changed, more than half the beetles then danced, and most of these beetles went the direction opposite to that in which they started.

These findings suggest that dung beetles navigate according to the position of celestial cues. They climb on top of their dung balls to get a good look at the sky, and move around in a circle to get a fix on their bearings.

"Our findings are exciting, because they suggest that dung beetles have developed very clever, robust techniques for orienting in a complex and ever-changing environment," Baird said. "A dung beetle has less than 0.0001 percent of the neurons of a human brain, yet it is able to orient along a straight line using information from the sky."

Baird and her colleagues detailed their findings online Jan. 18 in the journal PLoS ONE.