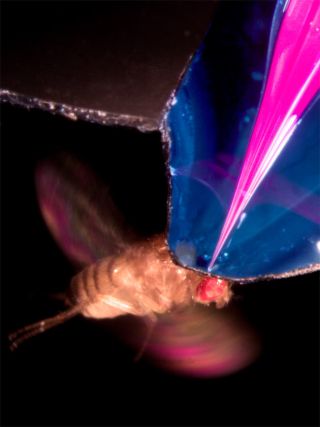 Researchers insert a dye-filled glass electrode (pink) into a fruit fly's brain as the fly is flapping its wings. The electrode and the brain are immersed in saline (colored blue).
(Image: © Gaby Maimon and Michael Dickinson/Caltech)

In a freaky fruit fly experiment, scientists have used electrodes to measure the brain activity of the tiny insects while flapping their wings for the first time. When the animals began to fly, neurons in the visual region of the brain ramped up activity abruptly, they found.

Though fruit fly brains are tiny, packing just 300,000 brain cells, the findings have implications for understanding brain changes in larger animals. For comparison, an average human brain has about 100 billion neurons.

"Our work on Drosophila [fruit flies] is of general interest because sensory neurons in many species — including birds, rodents, and primates — change their response strength depending on the behavioral state of the animal, but why these changes in sensitivity take place is not entirely clear," said study researcher Gaby Maimon of Caltech.

The research was published Feb. 14 in the advance online edition of the journal Nature Neuroscience.

Past recordings of neural-cell activity in fruit flies involved animals that had been stuck or glued down. Working with such a small brain can be a challenge in itself, but Maimon and colleagues wanted to keep the fly alive and active.

"The challenge was to be able to gain access to the brain in a way that didn't compromise the animal's ability to fly, or to perform behavior," said study researcher Michael Dickinson of Caltech. "We couldn't just rip the brain out of the body and put it into a dish."

So the team tethered the fruit fly so that its head was clamped into place while its wings were free to flap. Then, the scientists sliced off a patch of the hard cuticle covering the insect's brain and placed the electrodes onto neurons in the visual region of the brain.

Beneath the hood, a fruit fly's brain looks kind of like a white blob, Dickinson told LiveScience.

"These cells basically help the fly detect when its body posture changes," Dickinson said. "The signals from these cells are thought to control tiny steering muscles that then change the pattern of wing motion and bring the animal back into equilibrium."

A visual display of moving stripes made the fly think it was on the move, either walking or flying – which was set off by a puff of air that got the fly's wings flapping. The electrical activity of the visual brain cells roughly doubled when in flight, they found. The activity boost suggests this visual system is extra sensitive when the animal has taken wing.

"What this really tells us, at least with respect to this visual system, is that the fly's brain is in a different state when it's flying than when it's quiescent, when it would just be walking on the ground," Dickinson said.

Next, the team hopes to figure out what is behind the extra sensitivity and its purpose for the fruit flies.