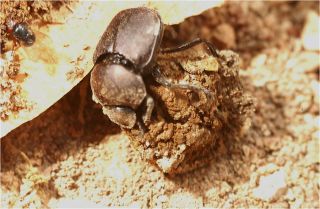 Dung beetles prefer the smelliest poop they can find, new research on the insects suggests. Odorous dung from omnivores, which eat a diet of both plants and animals, seems to be the most attractive to the beetles.

Some of the top choices? Human and chimpanzee dung.

"This novel research indicates that native dung beetle species will respond to dung from exotic animals," study researcher Wyatt Hoback, a professor at the University of Nebraska at Kearney, said in a statement

Dung beetles are usually pretty specific in their poop tastes, but researchers were wondering how they would react to exotic droppings, like those left by imported mammals on game farms. This was a problem in Australia, when humans imported cows and other large herbivores in 1778. The dung beetles didn't enjoy the bovine droppings, and instead flies and other parasites had a heyday.

The researchers used "pitfall" traps, large buckets buried in the ground, containing feces from one of many different species, or a dead, rotting rat in the bottom. Carrion, or the remains of dead animals, can also serve as a food source for dung beetles, so the researchers wanted to compare this to the dung samples. The walls of the bucket were too high for the dung beetles to crawl back out once they followed the scent. The traps were set out around a large cattle ranch in Nebraska.

They lured the beetles in with different kinds of native and exotic excrement from animals with all kinds of diets — meat eaters, plant eaters and anything-eaters (omnivores) — to capture beetles. "Native" animals in this area include bison and cougar. Some examples of "exotic" droppings they used included waterbuck, lion and chimpanzee dung.

Of the dung samples, human and chimpanzee feces (both species are omnivores) attracted the most dung beetles. The dead rat sample came in next, followed by pig droppings, then poop from the carnivorous species, which included lion and tiger dung. The excrement from herbivores, including the "native" bison, came in last.

This difference in preference could largely be attributed to omnivore dung being more odiferous compared with that of herbivore dung, the researchers said.

The different dung beetle species had their individual preferences, with some choosing the omnivore dung, while others favored the carcasses of dead animals. This specificity in dietary preferences isn't related to the quality of the dung, the animal's diet, or its origin, said study researcher Sean Whipple, a postdoctoral researcher at the University of Nebraska-Lincoln.

"Our results suggest that even closely related species of generalist-feeding dung beetles differ in their response to novel dung types," Whipple said.

The study was published in the April 2012 issue of the journal Environmental Entomology.