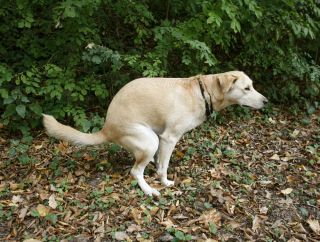 Dog owners have observed some odd behaviors among their pets — sniffing butts, eating garbage, giving unconditional love — but one habit has probably escaped their attention: Dogs apparently prefer to poop while aligned with the north-south axis of the Earth's magnetic field.

That's the surprising conclusion of an exhaustive study, conducted by German and Czech researchers, who spent two years watching 70 dogs while they defecated and urinated thousands of times. The scientists then compared the dogs' behavior and orientation with the geomagnetic conditions prevailing at the time.

The researchers found that the dogs preferred to poop when their bodies were aligned in a north-south direction, as determined by the geomagnetic field. (True north, which is determined by the position of the poles, is slightly different from magnetic north.) [10 Things You Didn't Know About Dogs]

And while dogs of both sexes faced north or south while defecating, only females preferred to urinate in a north or south direction — males didn't show much preference while urinating (perhaps because males tend to lift their legs when urinating, the experts speculated, while females usually drop their hips in a position somewhat similar to defecation).

This latest set of findings, published last week in the journal Frontiers in Zoology, joins a long and growing list of research showing that animals — both wild and domesticated — can sense the Earth's geomagnetic field and coordinate their behavior with it.

A 2008 analysis of Google Earth satellite images revealed that herds of cattle worldwide tend to stand in the north-south direction of Earth's magnetic lines when grazing, regardless of wind direction or time of day. The same behavior was seen in two different species of deer.

Birds also use magnetic fields to migrate thousands of miles, some research suggests. A 2013 report found that pigeons are equipped with microscopic balls of iron in their inner ears, which may account for the animals' sensitivity to the geomagnetic field.

Humans, too, might possess a similar ability — a protein in the human retina may help people sense magnetic fields, though the research into this and many other related geomagnetic phenomena is preliminary and therefore remains inconclusive.

How do dogs know?

The dog researchers used 37 different breeds in their study, from beagles and borzois to Transylvanian hounds. All of the animals were observed off-leash in open fields and other areas, so buildings, trees and other objects in the landscape wouldn't force the dogs to face one way or another.

The researchers also noted that while most dogs preferred to poop while facing north or south, most dogs also avoided facing east or west. But why? The answer remains elusive, the scientists admitted.

"It is still enigmatic why the dogs do align at all, whether they do it 'consciously' (i.e., whether the magnetic field is sensorial[ly] perceived) … or whether its reception is controlled on the vegetative level (they 'feel better/more comfortable or worse/less comfortable' in a certain direction)," the study authors wrote.

Further research is needed to determine how and why dogs (and other animals) sense and use the planet's magnetic field. Their study, the authors wrote, also "forces biologists and physicians to seriously reconsider effects magnetic storms might pose on organisms."