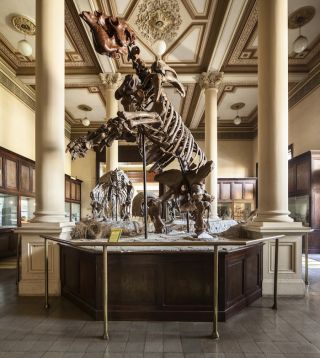 The skeleton of a megatherium, an elephant-size sloth native to South America, at the La Plata museum in Argentina.
(Image: © Bjarte Rettedal)

An ancient sloth weighing some 5 tons and sporting claws that extended a foot (0.3 meters) is helping to reveal how the slow, furry creatures ballooned in size long ago at a startlingly fast rate, a new study finds.

The massive beast, Eremotherium eomigrans, along with all of the sloth's giant predecessors, went extinct by about 11,000 years ago.

The new study found that some sloth lineages grew more than 220 pounds (100 kilograms) every million years — one of the fastest body growth rates known in the evolution of mammals. The rapid growth rate indicates that several factors in prehistoric times, such as environmental conditions or competition with other animals, may have favored large sloths, the researchers said in a statement. [Sloth Quiz: Test Your Knowledge]

Other studies have examined sloth growth rates, but accounted for only living species. The researchers incorporated extinct sloths into the equation for the new study to show that the animals grew at an incredibly fast rate over time.

There are six species of sloths living in South America today, which reach a maximum weight of about 12 lbs. (6 kg). However, the fossil record shows a richer diversity, with more than 50 known species that lived between about 2.6 million and 11,700 years ago. In all, the researchers looked at 57 species of sloths that are living or from the fossil record, and examined the average changes in body mass throughout their evolution, the study reported.

"Today's sloths are really the black sheep of the sloth family," study co-author Anjali Goswami, of the University College London earth sciences department, said in a statement. "If we ignore the fossil record and limit our studies to living sloths, as previous studies have done, there's a good chance that we'll miss out on the real story and maybe underestimate the extraordinarily complex evolution that produced the species that inhabit our world."

Nowadays, sloths are vegetarians that live in trees and typically weigh between 8 and 12 pounds (3.5 and 5.5 kg), the researchers said. In contrast, extinct sloths lived in a range of environments, and included ground-, tree- and water-dwelling sloths. Fossilized footprints suggest that some of these ancient sloths walked on their hind legs, and may have also eaten both plants and animals.

The new model may help researchers learn about the growth rates of other species, said study co-author John Finarelli of the University College Dublin Earth Institute.

"There are many other groups, such as hyenas, elephants and rhinos, that, like sloths, have only a few living species," Finarelli said. "But if we look into the distant past, these groups were much more diverse, and in many cases very different to their current forms."

The study was published today (Sept. 9) in the open-access journal BMC Evolutionary Biology.