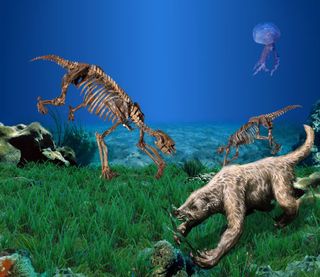 Millions of years ago, aquatic sloths roamed shallow waters off the coast of modern-day Chile and Peru. These now-extinct swimmers had highly dense bones that facilitated their transition from land to sea by helping them sink to seafloors to graze on vegetation, according to a new report.

Only two groups of sloths exist today, both of which live in trees and grow to be the size of small monkeys. But during the Miocene and Pliocene — about 25 million to 4 million years ago — a great diversity of sloths crawled the Earth, including giant sloths that grew to be the size of elephants, and slightly smaller ones that spent time underwater.

Fossil remains suggest these aquatic sloths originated on land and gradually transitioned to life underwater. A series of fossil beds along the coast of Peru contain remnants of five different species of extinct sloths that researchers have interpreted to be aquatic based on the structure of their bones. For example, the density of their bones is much higher than the density of terrestrial mammal bones, but similar to bones of aquatic mammals that graze on seafloor vegetation, such as manatees. [Image Gallery: 25 Amazing Ancient Beasts]

Researchers based at Sorbonne University in Paris were interested in confirming this transition from land to sea and analyzing the timing of the transition by studying the changes in bone density within progressively younger species preserved in the Peruvian fossil beds.

"It was really important for us to show that of course the compactness that was found is really over the top and clearly shows the aquatic adaption, because such high levels of compaction are only found in aquatic animals," study co-author Eli Amson told Live Science.

The team found that the density of the sloths' tibias (shin bones) and ribs all increased by roughly 20 percent over the course of roughly 3 million years beginning about 8 milliono years ago. This is relatively fast in the scope of geologic time, the team says.

These fossils provide the best evidence yet of the timing of any four-legged mammal's transition from a terrestrial to aquatic lifestyle, the team says.

Cause for transition, extinction

The sloths' transition from land to sea probably resulted from a lack of food along the coast of Peru.

"At that time, the coast of Peru was a desert, like it is today," Amson said. "There was nothing to eat, so they had to enter the water to consume food."

Land-dwelling ancestors of the aquatic sloths also had relatively dense bones compared with other mammals, so the researchers believe perhaps the high bone density served some unrelated function on land, and then later helped facilitate their transition to water. The researchers are unsure how the sloths may have benefited from dense bones on land, but note that some other land animals do have unusually compact bones today as well. For example, rhinoceroses have relatively dense bones thought to help them charge at other animals, Amson said.

Aquatic sloths went extinct about 4 million years ago, around the time the Isthmus of Panama closed and the Pacific Ocean became cut off from what is now the Caribbean Sea. This transition caused the waters off South America to become much colder than they had been, killing off the sea grasses the sloths fed on. Researchers think the sloths went extinct either due to the loss of their main food source, or simply because they were unable to tolerate the cold water, Amson said.

The team plans to continue studying other bones belonging to the five species of sloths to better understand how they evolved through time.

The study findings are detailed today (March 11) in the journal Proceedings of the Royal Society B.