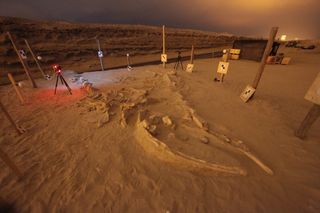 The researches collected 3D scans of the bones to analyze back in the lab.
(Image: © © Vince Rossi / Smithsonian Institution )

Dozens of fossilized whales, seals and other marine animals have been discovered piled up in an ancient tidal flat in northern Chile, providing the first fossil evidence of repeated mass die-offs, according to a new report.

Four distinct layers of bones appear at the site, suggesting the mass die-offs — also known as mass strandings — occurred repeatedly over the course of thousands of years, some time between about 6 million and 9 million years ago, an international team of scientists report. Whale bones dominate the site, but the researchers have also identified 10 other types of marine animals in each layer, including aquatic sloths and a brand-new seal species.

Many of the skeletons overlap each other and appear to be belly-up, which the paleontologists interpret to suggest the animals died offshore and were subsequently washed into the shallow waters of a tidal flat where sand eventually buried them. [Images of the Marine Fossils From Ancient Mass Die-Off]

The scientists think the animals were most likely poisoned-to-death from so-called harmful algal blooms, similar to the blooms that cause red tides today. Certain species of plankton produce small quantities of toxins that can become lethal to marine life when consumed or inhaled in large quantities. The toxins can accumulate in the environment when plankton blooms in thick mats, often as a result of rapid fertilization from an inflow of nutrients spilling off from nearby land, or upwelling from deep ocean water.

Other possible causes for mass die-offs — aside from the human causes that weren't relevant 9 million years ago, such as pollution and injury from navy sonar — include tsunamis and viruses. However, no evidence for a tsunami was found, and viruses do not generally affect such a wide array of species, study co-author Nicholas Pyenson, a researcher at the Smithsonian Institution, told Live Science.

To further support their case for harmful algal blooms as the cause of the deaths, the team found orange splotches in the rock surrounding many of the skeletons that they believe could have been left by the chemical degradation of the algal mats over time. The researchers analyzed the orange rock under a high-power microscope, and found tiny spheres similar to those found in dinoflagellates — the plankton responsible for producing red tides today.

Still, the spheres have degraded over time, so the researchers cannot definitively confirm they come from a species associated with harmful algal blooms.

"It's a good candidate, but we can't exclude the possibility that these have a geological origin," Pyenson told Live Science.

Harmful algal blooms have been responsible for mass marine die-offs in modern times as well, including an incident off the coast of Cape Cod in the late 1980s that resulted in 14 humpback whales piling up near shore in a similar way these fossils appear to have piled up in Chile.

The findings confirm that marine animals have experienced mass die-offs before humans began interfering with the environment, and also provide a rich window into ancient marine ecology, Pyenson said.

The team has created detailed 3D images of the fossils to study back in the lab, and also plans to return to the site to continue digging up what they predict to be hundreds of additional fossils waiting to be uncovered.

The findings are detailed today (Feb. 25) in the journal Proceedings of the Royal Society B.

Editor's note: This story was updated to clarify that this is the first fossil evidence of repeated mass strandings.