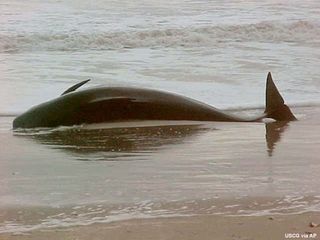 A beached pilot whale on Jan. 15, 2004 near the Oregon Inlet of North Carolina's Outer Banks.

The sonar "is capable of flooding thousands of square miles of ocean with dangerous levels of noise pollution,'' according to the lawsuit filed in federal court in Los Angeles.

The Navy settled a similar lawsuit two years ago by agreeing to limit the peacetime use of experimental low-frequency sonar. The new lawsuit, by the Natural Resources Defense Council and other plaintiffs, seeks a court order to curb mid-frequency sonar, the most common method of detecting enemy submarines.

NRDC attorney Joel Reynolds said the group recognizes the Navy's need to detect enemies, and he noted that the lawsuit seeks limits on sonar during training exercises, not in war.

"Our position is that whales shouldn't have to die for practice,'' he said.

The environmentalists want the Navy to use harmless passive sonar _ listening for sounds made by marine mammals themselves _ to locate the animals before using mid-frequency sonar. They also want the Navy to avoid migration and calving areas and to turn on sonar systems gradually so that the animals have time to flee.

Navy spokesman Lt. William Marks said the Navy already is doing many of the things demanded in the suit.

The lawsuit blames the Navy for the January stranding and deaths of at least 37 whales on North Carolina's Outer Banks after a mid-frequency sonar exercise. The Navy said the exercise was probably too far away to have harmed the whales.