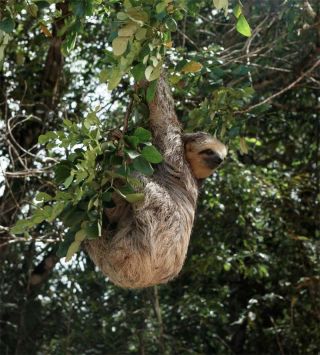 A sloth at the edge of a forest in the Amazon.
(Image: © Image courtesy of Robert Ewers)

Famously sluggish sloths spend most of their lives upside down. But unlike humans, these creatures don't have trouble breathing in that inverted position, because their internal organs are fixed in place, new research finds.

Three-toed sloths (Bradypus variegatus) have special "adhesions" that anchor their guts to their lower ribs, preventing their organs from pressing down on their lungs, scientists say.

Sloth organs can be heavy, especially when a lot of waste builds up in their bowels. The animals, which live in the rain forests of Central and South America, are so economical in their energy use that they leave the trees just once a week to poop. (Why bother leaving the canopy at all? A recent study found that by pooping on the forest floor, sloths help create a breeding ground for moths that live in the animals' fur; these moths in turn boost the presence of algae, a crucial part of the sloths' diet.) [Photos: Slow-Moving and Ridiculously Cute Sloths]

By holding it in, sloths can store up to a third of their body weight in urine and feces.

"For a mammal that spends a significant amount of time hanging upside down, this large abdominal weight pressing down on the lungs would make breathing very costly in terms of energy, if not impossible," study author Rebecca Cliffe, a researcher from Swansea University who works at the Costa Rica Sloth Sanctuary, said in a statement.

Cliffe and colleagues dissected two sloths that died of natural causes. They found adhesions that bear the weight of the liver, stomach and bowels when the sloth hangs upside down. The researchers estimated these fibers could reduce a sloth's energy expenditure by 7 percent to 13 percent.

"To a sloth, an energy savings of 7 to 13 percent is a big deal," Cliffe said. "They generate just about enough energy from their diet to move when and where required, but there is not much left in the tank afterwards. It would be energetically very expensive, if not completely impossible, for a sloth to lift this extra weight with each breath were it not for the adhesions."

These adhesions might limit flexibility in the body's midsection, which is likely why many mammals lack this feature. But for sloths, this internal binding suits their slow lifestyle, allowing them to hang fully inverted to reach food without using extra power and without putting any added pressure on their insides, the researchers wrote.

The findings were described online April 23 in the journal Biology Letters.