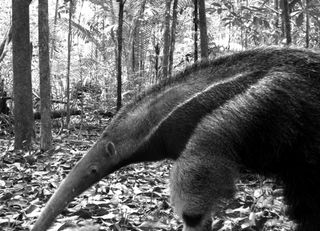 They have poor vision, bad hearing and no teeth. And yet, anteaters can be deadly.

In a new case report, scientists detail a gruesome anteater attack that left one hunter dead in northwestern Brazil, just two years after another man was killed in a similar confrontation with one of the long-nosed creatures. While such incidents are rare and anteaters usually avoid contact with humans, the attacks should serve as a warning to humans encroaching on anteater turf, the authors wrote in the journal Wilderness and Environmental Medicine this month.

Giant anteaters, which live in savanna-like fields in South America and Central America, are the largest of the four living anteater species, and can grow up to 7 feet (2.1 meters) long in adulthood. They have four sharp claws on both of their forelimbs that they can use to quarry anthills and termite mounds — and, apparently, to inflict fatal wounds on humans. [In Photos: The World's 10 Deadliest Animals]

The creatures assume a standing position when they feel threatened, sometimes referred to as an "anteater's hug." On the Internet, anteaters standing messiah-like with arms outstretched have become the benign stars of memes. But in the wild, an anteater posed like it wants a hug is really throwing up a red flag.

On Aug. 1, 2012, a 47-year-old man, who lived in a rubber plantation in Guajará County in Brazil's Amazonas State, near the border with Peru, went hunting with his two sons. Their dogs cornered an adult giant anteater and it went into its standing pose, wrote the researchers, led by Vidal Haddad Jr., an associate professor at Sao Paulo State University's Botucatu Medical School.

The man approached, but was worried about accidentally shooting his dogs, so he opted for a knife instead of his rifle. But before the man could make a move, the anteater "grabbed" him with its forelimbs, Haddad and colleagues wrote. The man's sons eventually freed him from the anteater's clutches, but he was severely wounded and bled to death at the scene. One of the sons, who also suffered some slight injuries, shot the anteater to death.

When doctors and forensic investigators later examined the victim, they found that he had bruises and lesions on the left side of his neck, two 1.5-inch (4 cm) puncture wounds in his left arm, eight puncture wounds in his left thigh and abrasions on his right thigh. An autopsy revealed severe damage to his left femoral artery, a large artery in the thigh, according to the case report.

A similar incident occurred in 2010, when an anteater attacked a 75-year-old man who was hunting in Brazil's Mato Grosso state, the scientists noted. The victim in this case, too, suffered a grave injury to his femoral artery and bled to death. His death was reported in the local media at the time, but scientists did not formally document the animal attack, the authors wrote.

Though, the researchers wrote, the tragic 2012 case was "first and foremost an accident," they said these events should "serve as a warning to respect the boundaries between wildlife and humans, especially when they co-inhabit a given area."

The giant anteater is classified as "vulnerable" by the International Union for Conservation of Nature (IUCN). The biggest threat to the species' survival in the wild is habitat loss, according to the IUCN. The animals, which have poor hearing and vision, are prone to being killed by cars traveling on roads that cut through their territory. When sugarcane plantations are burned before harvest, sometimes anteaters are killed or severely burned. They are also hunted for food and in the illegal pet trade.