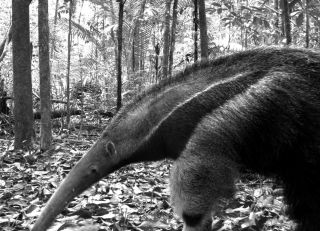 From a minute mouse to giant anteaters and the enormous elephant, camera-trap photos are revealing the secret lives of mammals, with the first such study documenting 105 species from nearly 52,000 images.

The global camera-trap study confirms that habitat loss and fragmented forests can be detrimental to the survival of mammal populations, the researchers report this week in the journal Philosophical Transactions of the Royal Society. The results were unveiled Monday (Aug. 15). [See the camera-trap photos]

"The results of the study are important in that they confirm what we suspected," said study researcher Jorge Ahumada, ecologist with the Tropical Ecology Assessment and Monitoring Network (TEAM) at Conservation International. "Habitat destruction is slowly but surely killing our planet's mammal diversity."

To gather data, researchers set up a total of 420 cameras, which included 60 camera traps in place for a month at each of seven sites:

The team collected the photos between 2008 and 2010, and thengrouped animals by species, body size, diet and other factors. Compared with smaller, fragmented sites, larger protected areas and continuous forests had: higher species diversity, a greater variety of animal sizes, and a greater variety of diets among those mammals (insectivores, herbivores, carnivores and omnivores).

In addition, the team found that some mammals are more vulnerable to habitat loss than others. For instance, insect-eating mammals such as anteaters, armadillos and some primates seem to be the first to disappear; other groups, such as herbivores, seem to be less sensitive.

The Central Suriname Nature Reserve showed the greatest species diversity, with 28 different mammal species spotted, while the Nam Kading National Protected Area in Laos had the lowest species diversity, with 13 mammal species. Fragmented sites like Nam Kading tended to have one or more functional groups missing; for instance, insectivores, which perform the function of eating insects, were gone from Nam Kading and Bwindi lacked large ungulates.

The camera-trap project is part of the Tropical Ecology Assessment and Monitoring Network (TEAM), a partnership between Conservation International, The Missouri Botanical Garden, The Smithsonian Institution and the Wildlife Conservation Society, and partially funded by these institutions and the Gordon and Betty Moore Foundation.