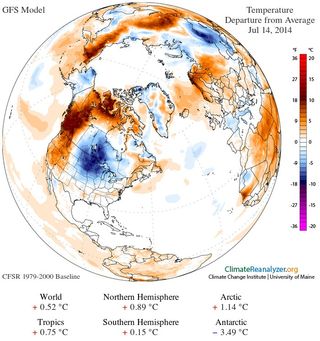 A cold front blowing across the United States this week could bring temperature drops of 20 degrees and trigger huge thunderstorms in some areas.
(Image: © Climate Reanalyzer/Climate Change Institute, University of Maine)

A blast of cold air that blew in from the Gulf of Alaska and swept across the Great Lakes is now making its way south. Headlines warn that the cold front could herald a return of the "polar vortex," but experts are saying otherwise.

Polar vortexes typically develop around the North Pole during most winters. They form in a pattern similar to that of tropical hurricanes, except the winds spinning around the calm center of a polar vortex are freezing cold.

In January, a polar vortex blasted the northern United States with frigid air and caused bitterly cold temperatures farther south than normal. This week's cold front is following a similar pattern, where cold air from the Arctic is sweeping down south. [Weirdo Weather: 7 Rare Weather Events]

By this Wednesday (July 16), the unusual weather could turn what is normally one of the hottest weeks of the summer into a pleasant autumnlike week in parts of the western United States and Northern Plains, where highs may be about 65 to 70 degrees Fahrenheit (18 to 21 degrees Celsius). The cold front will likely deal the Northeast only a glancing blow, and temperatures in this region may dip about 10 degrees below average.

Strictly speaking, the cold front is not a polar vortex, according to experts. The impending cold front is called a "high meridional event," but there are some similarities.

"It's the same general circulation pattern, but the effects are extremely different," Bob Oravec, a senior forecaster at the National Oceanic and Atmosphere Administration (NOAA) Weather Prediction Center, told Live Science. "In the summer, if you go outside in 20 degrees (Fahrenheit) below normal weather, you won't really care, but in the winter, the effects were significantly different because it was already so cold."

NOAA is predicting below-normal temperatures for a huge swath of the East Coast this week. The cool air is expected to roll through tomorrow (July 15), and should keep temperatures between 70 and 80 degrees Fahrenheit (21 to 27 degrees Celsius) on the East Coast.

The unusual summer chill could also trigger some extreme and dangerous weather in the United States, experts say. The cold temperatures will likely send thunderstorms sweeping across much of the country this week. Hail and tornadoes are possible in southern New England down to the mid-Atlantic. In the West, severe lightning, flash floods and dust storms are possible, according to the Weather Channel.

Despite the wild weather in store for this week, Oravec said the cold front could bring some significant benefits. The predicted downpour may finally quench the severe drought in the western United States. While parts of the country may welcome a change from the sweltering July heat, temperatures are expected to climb back up soon.