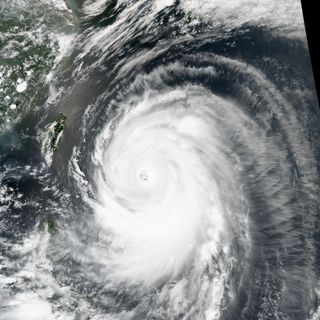 The Suomi-NPP satellite captured this image of the super typhoon churning toward Okinawa and southern Japan on July 7, 2014, at 4:55 Universal Time (1:55 p.m. local time on July 8).
(Image: © NASA Earth Observatory)

Neoguri is the first super typhoon of 2014, a term used to describe typhoons with maximum sustained one-minute surface winds of 150 mph. The equivalent hurricane strength would be a category 4 or 5, according to the National Oceanic and Atmospheric Administration (NOAA).

This image of the storm was captured by the Visible Infrared Imaging Radiometer Suite (VIIRS) on the Suomi-NPP satellite at 1:55 p.m. local time on July 8 (4:55 Universal Time, July 7). Since then, Neoguri, which was downgraded to a regular typhoon, has hammered the Okinawa prefecture of Japan, forcing the evacuation of almost 600,000 people and causing at least one death. The Japanese mainland is now bracing for Neoguri's strong winds and rain. Landfall is expected tomorrow night (July 9) or Thursday morning (July 10) on Kyushu Island, according to Accuweather. [See Photos: 8 Terrible Typhoons]

The strongest winds recorded over land so far were 79 mph (127 km/h) sustained and 118 mph (190 km/h) gusting on Tokashiki Island, according to Japan's Meteorological Agency. Cool, dry air along the storm's path has weakened it slightly from its maximum super typhoon status, but rains remain heavy. Accuweather reported that 6 inches (15.25 centimeters) of precipitation fell in Naha, Okinawa.

"By the time all is said and done, localized rainfall amounts in excess of 380 mm (15 inches) will slam parts of Japan with the most likely locations being the Ryukyu Islands, Kyushu, Shikoku and eastern Honshu," said AccuWeather.com Meteorologist Evan Duffey.

The Suomi-NPP satellite isn't the only space-based eye to catch a glimpse of Neoguri. Astronaut Alexander Gerst, current crewmember aboard the International Space Station, snapped several impressive photographs of the storm, all of which are available on his Flickr page.

Neoguri is the ninth named storm of the 2014 Pacific typhoon season, and the second to reach typhoon status. The first, Faxai, developed in late February and failed to threaten land before breaking up southeast of Japan.

Hurricanes, typhoons and cyclones refer to the same type of storm, called a tropical cyclone, just in different locations. For instance, whereas typhoons form in the Northwest Pacific Ocean, hurricanes get their start in the Atlantic Ocean, Caribbean Sea and Northeast Pacific Ocean, and cyclones occur in the South Pacific and Indian Ocean, according to the National Oceanic and Atmospheric Administration.