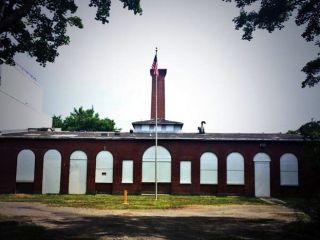 Tesla's lab on the North Shore of eastern Long Island is destined to become a museum dedicated to the inventor.
(Image: © Megan Gannon for Live Science)

SHOREHAM, N.Y. — Nikola Tesla's final workshop, and the site of perhaps his boldest project, was nearly lost to history.

Now, after a two-decade-long effort to acquire the neglected lab here on the North Shore of Long Island, a private group is getting closer to turning the site into a Tesla museum — and a place of pilgrimage for the eccentric inventor's adoring fans.

"All of this was quite a jungle," said Jane Alcorn, president of the Tesla Science Center, showing off the site, known as Wardenclyffe, to Live Science this week. "We actually had big machetes and people with clippers and chain saws because where we're standing now, in this parking area, it was so covered with vegetation you couldn't even walk through it." [See photos of Tesla's lab at Wardenclyffe]

Today, Wardenclyffe has the eerie vibe of an abandoned industrial complex, but when Tesla bought the land in 1901, it looked more like a prairie.

With the backing of investors like J.P. Morgan, Tesla built a 187-foot (57 meters) transmitter tower designed to prove he could broadcast messages, and perhaps even distribute free electricity across great distances without any wires.

The Serbian-American inventor had grand plans for the 200-acre (81 hectares) site, which was a train ride away from his home at the Waldorf-Astoria hotel in Manhattan. Tesla envisioned a community of homes called Radio City — long before New York City's Radio City Music Hall was built — for workers who would be operating his transmissions systems. Tesla even got a star architect to design his lab: The red brick building just north of the tower was the final project of Stanford White, whose murder in 1906 became a tabloid sensation.

But with mounting debts and a loss of funding, Tesla had to abandon the project just a few years after he started it.

"Unfortunately he was never able to complete it," Alcorn said. "He did do some testing and people as far away as Connecticut at the time said they saw the sparks flying off of the top. It's been described as a gigantic Tesla coil. People are still discussing what he was trying to do and what the underlying science was behind it." [Infographic: How the Tesla Coil Works]

On the Fourth of July in 1917, the transmitter tower was leveled with dynamite. Its parts were sold to help pay off Tesla's debts.

More than 20 years later, Wardenclyffe was reborn as an industrial site. In 1939, Peerless Photo Products took over Tesla's former lab and the surrounding land to manufacture emulsions for photo paper. Peerless was later bought by Agfa Corp., which had to begin a huge, federally mandated cleanup of the site in the 1980s, after it ceased operations at Wardenclyffe. Untreated water contaminated with silver, cadmium, lead and other chemicals had been dumped here for years.

While the cleanup was still underway, local Tesla fans and science educators began planning to acquire and preserve the 16 acres (6.5 hectares) that remained of Wardenclyffe. In 1996, the Tesla Science Center, originally called Friends of Science East, was formed.

By 2012, the historic site was at risk of being sold to developers. But a successful crowdfunding campaign on Indiegogo, in collaboration with the popular comic website The Oatmeal, helped the Tesla Science Center raise more than a million dollars to finally save the lab. Today, July 10, on Tesla's 158th birthday, the organization announced that billionaire entrepreneur Elon Musk, who named his electric car company after Tesla, has pledged $1 million to the creation of the museum.

The group has made visible progress with the site's restoration. The grass is neatly manicured inside the tower's only surviving element: an octagon-shaped base made of concrete and slabs of Fordham Gneiss, a type of rock quarried in New York. A Tesla statue, dedicated last year by the president of Serbia, faces the street, and there is a row of shiny new flagpoles. Enough vegetation and debris has been cleared that the red brick lab is finally visible from the fence.

"We wanted the public to be able to see the laboratory," Alcorn said. "That was one of our first goals because we felt that if the community could see it they would take a little ownership and pride in it. For years I had come and peeked through the fence to try to see it but there was so much overgrowth. Even in the winter you just couldn't see that much."

Because the site changed hands and was heavily reused, not many artifacts from Tesla's era survive beyond local lore: Alcorn said families in Shoreham have told stories about how teenagers would climb the tower in winter to ice skate on a flat, frying pan-shaped surface that collected water under the steel dome, 160 feet high (49 m).

Eventually, the group may commission archaeologists to probe the site to find out if there's anything hidden underground — namely, tunnels.

"Tesla described some tunnels in his deposition when he was going through the foreclosure proceedings, so we know that there's something there — we just don't know what," Alcorn said. "We don't know if they're ventilation shafts, how deep they are, what they might contain if anything, how big they could be, whether it's something a person could get through, or if it's just for piping." [Creative Genius: The World's Greatest Minds]

For now, the organization's priority is to get the site looking like it did during Tesla's time.

The red brick lab had been divided into two stories and it's now a vandalized warren of small offices. The Tesla Science Center would like to restore it to its original condition, with two large rooms with soaring ceilings and a gallery space at the top. They'll eventually tear down a white, windowless warehouse attached to the lab, and other buildings that were added later. The group also intends to build replicas and models of Tesla's inventions, and perhaps even a scaled-down version of the tower, as well as some kind of workshop in the spirit of Tesla.

"We'd like to have a maker or hacker lab for people to come and learn and geek out," Alcorn said.

Tesla's pioneering work on alternating current made possible the electrical systems that power everything from laptops to streetlights today, but the inventor died without wealth and wide recognition. Today, however, Tesla's popularity has surged. More than 70 years after his death, the genius inventor gets name-checked by Elon Musk and Kanye West alike.

With the swell of interest in Tesla, I asked Alcorn if it was fair to characterize him an underdog or overlooked scientist.

"He's still the underdog in the sense that he's not part of American schoolchildren's curriculum," Alcorn said. "Until he's part of the curriculum, I could say he's still not recognized for what he did. Here we are using alternating current for the electric grid. We wouldn't be powering our homes the way we are if it weren't for Tesla. And yet whose name do we know? Thomas Edison."

Though Wardenclyffe isn't open to the public yet, Tesla fans from as far away as Italy, California and South America have showed up during volunteer hours to help clean up the site, Alcorn said. The Tesla Science Center has hosted Christmas tree and menorah lightings at the tower base. And the group is expecting a few hundred people to show up at the site today to celebrate Tesla's birthday. Several people have even asked if they could have a Wardenclyffe wedding.

"Someday I think that could happen," Alcorn said. "Maybe I'll go get ordained."