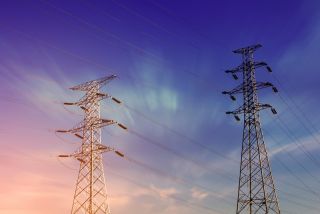 Electric current is electric charge in motion. It can take the form of a sudden discharge of static electricity, such as a lightning bolt or a spark between your finger and a ground light switch plate. More commonly, though, when we speak of electric current, we mean the more controlled form of electricity from generators, batteries, solar cells or fuel cells.

Most electric charge is carried by the electrons and protons within an atom. Protons have positive charge, while electrons have negative charge. However, protons are mostly immobilized inside atomic nuclei, so the job of carrying charge from one place to another is handled by electrons. Electrons in a conducting material such as a metal are largely free to move from one atom to another along their conduction bands, which are the highest electron orbits. A sufficient electromotive force (emf), or voltage, produces a charge imbalance that can cause electrons to move through a conductor as an electric current, according to Serif Uran, a professor of physics at Pittsburg State University.

While it is a bit dicey to compare electric current to the flow of water in a pipe, there are some similarities that might make it somewhat easier to understand. We can think of the flow of electrons in a wire as the flow of water in a pipe, according to Michael Dubson, a professor of physics at the University of Colorado Bolder. The caveat is that, in this case, the pipe is always full of water. If we open the valve on one end to let water into the pipe, we don't have to wait for that water to make its way all the way to the end of the pipe. We get water out the other end almost instantaneously because the incoming water pushes the water that's already in the pipe toward the end. This is what happens in the case of electrical current in a wire. The conduction electrons are already present in the wire; we just need to start pushing electrons in one end, and they start flowing at the other end almost immediately.

According to the Georgia State University's HyperPhysics website, the actual speed of an electron in a wire is on the order of a few million meters per second, but it doesn't travel straight down the wire. It bounces around nearly at random and only makes progress at a few millimeters per second. This is called the electron's drift velocity. However, the transmission speed of the signal, when electrons start being pushed out the other end of the wire after we flip the switch, is nearly the speed of light, which is about 300 million meters per second (186,000 miles per second). In the case of alternating current, where the current changes direction 50 or 60 times per second, most of the electrons never make it out of the wire.

Charge imbalances can be created in a number of ways. The first known way was to create a static charge by rubbing two different materials together, such as rubbing a piece of amber with animal fur. A current could then be created by touching the amber to a body with less charge or to ground. However, this current had very high voltage, very low amperage, and lasted for only a fraction of a second, so it could not be made to do any kind of useful work.

The next known way to create a charge imbalance was the electro-chemical battery, invented in 1800 by Italian physicist Alessandro Volta for whom the unit for electromotive force, the volt (V) is named. His "voltaic pile" consisted of a stack of alternating zinc and copper plates separated by layers of cloth soaked in salt water and produced a steady source of direct current (DC). He and others improved and refined his invention over the next few decades. According to the National Museum of American History, "batteries attracted the attention of many scientists and inventors, and by the 1840s were providing current for new electrical devices like Joseph Henry's electromagnets and Samuel Morse's telegraph."

Other DC sources include fuel cells, which combine oxygen and hydrogen into water, and produce electrical energy in the process. Oxygen and hydrogen can be supplied as pure gasses or from air and a chemical fuel such as alcohol. Another source of DC current is the photovoltaic orsolar cell. In these devices photonic energy from sunlight is absorbed by electrons and converted into electrical energy.

Most of the electricity that we use comes in the form of alternating current (AC) from the electric power grid. Alternating current is produced by electric generators that operate on Faraday’s Law of Induction, by which a changing magnetic field can induce an electric current in a conductor. Generators have rotating coils of wire that pass through magnetic fields as they turn. As the coils rotate, they open and close with respect to the magnetic field and produce an electric current that reverses direction every half turn. The current goes through a complete forward-and-reverse cycle 60 times each second, or 60 hertz (Hz) (50 Hz in some countries). Generators can be powered by steam turbines heated by coal, natural gas, oil or a nuclear reactor. They can also be powered by wind turbines or water turbines in hydroelectric dams.

From the generator, the current goes through a series of transformers, where it is stepped up to a much higher voltage for transmission. The reason for this is that the diameter of the wires determines the amount of current, or amperage, they can carry without overheating and losing energy, but the voltage is limited only by how well the lines are insulated from the ground. It is interesting to note that the current is carried by only one wire and not two. The two sides of direct current are designated as positive and negative. However, because the polarity of AC changes 60 times per second, the two sides of alternating current are designated as hot and ground. In long-distance power transmission lines, the wires carry the hot side, and the ground side travels through the Earth to complete the circuit.

Since power equals voltage times amperage, you can send more power down the line at the same amperage by using higher voltage. The high voltage is then stepped down as it is distributed through a network of substations until it gets to the transformer near your house, where it is finally stepped down to 110 V. (In the United States, wall sockets and lights run on 110 V at 60 Hz. In Europe, nearly everything runs on 230 V at 50 Hz.)

Once the current gets to the end of the line, most of it is used one of two ways: either to provide heat and light through electrical resistance, or mechanical motion through electrical induction. There are a few other applications — fluorescent lights and microwave ovens come to mind — that operate on different principles, but the lion's share of power goes to devices based on resistance and/or inductance. A hair dryer, for example, uses both at the same time.