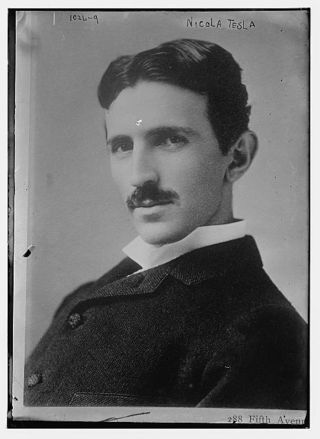 Nikola Tesla (1856-1943) is considered one of history's greatest inventors.
(Image: © Library of Congress)

Nikola Tesla has a fan club. Many fan clubs, in fact.

The Serbian-American inventor and engineer died 71 years ago. He lived his last years destitute and alone in a New York City hotel, obsessed with feeding pigeons and building a war-ending "death ray" weapon. But today (July 10), on his 158th birthday, Tesla is an object of fascination.

The oddest thing about Tesla's legacy is that his fans aren't just history buffs, or scientists or some other group you'd normally expect to revere a man whose inventions made the world what it is today. For every hardcore engineer oohing and ahhing over Tesla coils and electric oscillators, there is a conspiracy-minded mystic claiming that Tesla was an alien, or that his reincarnation is here and participating in a low-budget documentary.

This wide-ranging fan base speaks to the tensions that characterized Tesla's life: He was an engineering genius who struggled with mental illness, a handsome man who was asocial and celibate, and a scientific celebrity who languished in obscurity soon after his death. His legacy is important enough to matter to everyone, nerdy enough to feel special to science-loving geeks and weird enough to attract those on the fringes — though these factions are sometimes as divided by their love for Tesla as they are united by it.

Tesla "does have a broad-based appeal nowadays, much more than one would have expected 15 or 20 years ago," said Jane Alcorn, president of the Tesla Science Center at Wardenclyffe in New York. [Creative Genuis: The World's Greatest Minds]

That Tesla should ultimately be remembered is no surprise. He was a genius, a mathematical whiz and the holder of hundreds of patents in his lifetime. He played a role in the infamous "War of Currents," a battle between his former employer, Thomas Edison, and his new employer, George Westinghouse, over whether the fledgling electrical grid should run on alternating or direct power. Tesla's did work crucial to the development of the radio, and he became embroiled in legal battles over patents with Guglielmo Marconi, who made the first transatlantic radio transmission. In his laboratory in Colorado Springs, Colorado, Tesla literally created lightning — which makes him sound like the prototype of a mad scientist.

His personal life was just as intriguing as his scientific achievements. Tesla never had any known romantic attachments, despite his dashing good looks and reported appeal to women. He struggled with mental illness throughout his life, and may have had obsessive-compulsive disorder in his later years. He was reportedly obsessed with the number three, and hated pearl jewelry.

There's no wonder that this story draws interest, said Jeremiah Messinger, the head of the Tesla Museum of America in Colorado Springs.

"No one says, 'Oh, he invented the A/C motor, he had a death ray, and had 700 inventions and used to work for Edison?' Oh, I don't care about that," Messinger told Live Science.

It seems anyone can get on board with the story of a man whose inventions make life what it is today. But Tesla also holds a special appeal for a niche crowd: geeks. In 2012, Matthew Inman, the creator of the Web comic "The Oatmeal," showed just what this crowd's fandom could do.

Inman penned a comic about why Tesla is "the greatest geek who ever lived," and the artist soon followed up with another strip calling for donations to save Wardenclyffe, the site in New York where Tesla once had a laboratory. The goal was to raise at least $850,000 in 45 days. After only nine days, the campaign had already raised more than $1 million.

Inman's initial comic about Tesla portrayed the inventor as an underdog, who, in contrast to his foil Thomas Edison, worked for the love of problem solving rather than the love of profit. It's a slightly overdramatized narrative, said Alcorn, who partnered with Inman to raise funds to preserve Wardenclyffe. In reality, Alcorn told Live Science, Edison and Tesla had at least a grudging respect for each other over the course of their careers. Nevertheless, it's not hard to see why this narrative would appeal to geeky types in places like Silicon Valley, California, where a recent crowdfunding campaign erected a statue of Tesla in Palo Alto. [Tesla vs. Edison: How the Two Inventors Stack Up (Infographic)]

But geeks aren't the only ones who see a mascot in Tesla. On conspiracy-minded forums, debates persist over Tesla's supposed "death ray," which the inventor claimed to be developing in his later years. Oddly formatted blogs promise Tesla's secret to free, unlimited energy — a secret suppressed by the powers that be, of course. Others claim that Tesla talked to aliens, a conspiracy theory with origins in Tesla's own words. (During his experiments in Colorado Springs, Tesla claimed to have received transmissions he believed could have come from Mars.) Still others claim that Tesla himself was an alien.

Meanwhile, a group of independent filmmakers is seeking funding for a film called "Return of Tesla," which purports to be about the reincarnation of Tesla himself. The movie is "not controlled by financial tycoons" and "untainted by big media," the filmmakers promise.

These fans make strange bedfellows with the science and engineering geeks that revere Tesla for his mechanical knowledge and electrical inventions.

"The only reason people like Tesla is because the UFO market is oversaturated, and people have made almost as much money as they can from it," Messinger said, arguing that conspiracy theorists latch onto Tesla in a bid for self-promotion. He said that money motivates many Tesla devotees.

"There are a lot of con games going on, people who are just interested in making money off the asteroids around the Tesla planet," Messinger said.

The Wardenclyffe group, which is working to build a museum on the site of the former laboratory, takes an empirical approach to Tesla's legacy, Alcorn said. But she said she would never turn away someone who finds meaning in Tesla on a more spiritual level. In life, she said, Tesla consulted with a swami and had an interest in things that would be considered unscientific today.

"My board consists of several scientists, so they are not of the mystical mind," Alcorn said. "But I also see that scientists and the more esoteric kinds of perspectives are finding commonalities as time goes on. Or at least, one way of explaining something is a scientific way, and there's another way of explaining the same thing in a spiritual way."