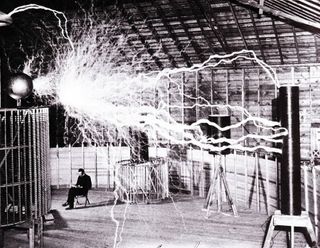 A photo of Nikola Tesla in his laboratory in Colorado Springs, Colorado, in December 1899. The electrifying image is actually a double exposure, created by exposing the photographic plate twice (once to capture the electrical bolts, and then a second time to capture the rest of the equipment and Tesla sitting in the chair).
(Image: © Dickenson V. Alley)

Nikola Tesla may be known today as one of history's greatest inventors, but the intrepid scientist's eccentricities have become as legendary as his trailblazing discoveries in the field of electricity.

Tomorrow (July 10) marks the 158th anniversary of Tesla's birth, and to celebrate the occasion, Live Science is looking back at Tesla's legacy, the cult of personality that has developed around the inventor in the years after his death, and the decades-old debate about who should be crowned the greatest inventor of all time: Nikola Tesla or Thomas Edison.

Though Tesla holds 112 lifetime U.S. patents, and is most famous for helping to develop the modern alternating current (AC) system of electric power, the inventor died penniless and in relative obscurity on Jan. 7, 1943, at age 86. [Creative Genius: The World's Greatest Minds]

Tesla's outsized and quirky personality, along with some of his more far-out ideas — such as his experiments to develop a particle gun, or death ray — earned him a reputation that fell somewhere between "creative genius" and "mad scientist." But while some regard him as the true father of electricity, others have come to remember Tesla more for his peculiarities than his accomplishments.

Here are some of the strangest facts about Tesla:

-Tesla rarely slept, and claimed he never dozed for longer than two hours. The inventor also said he once worked for 84 hours straight without any rest, according to John O'Neil, author of the book "Prodigal Genius: The Life of Nikola Tesla" (Cosimo Inc., 2006).

-Later in his life, Tesla frequented parks in New York City, often rescuing injured pigeons and nursing them back to health. A special PBS report on Tesla's life and legacy claimed that when the inventor took up residence at the Hotel New Yorker, "he had the hotel chef prepare a special mix of seed for his pigeons, which he hoped to sell commercially."

-Tesla was a vegetarian, but eventually limited himself to a peculiar diet of only milk, honey, bread and vegetable juices, according to Marc Seifer, author of "Wizard: The Life and Times of Nikola Tesla," (Citadel Press, 1996). Later in life, he was consumed by an extreme aversion to germs, and would only eat food that had been boiled, reported PBS.

-Tesla allegedly had a photographic memory, and could memorize entire books, according to Margaret Cheney, author of "Tesla: Man Out of Time" (Simon and Schuster, 2001).

-According to Seifer's book "Wizard: The Life and Times of Nikola Tesla," the inventor claimed that repeatedly squishing his toes helped to stimulate his brain cells. In fact, Tesla reportedly performed his toe exercises nightly, 100 times for each foot.

-Tesla spent decades as a New York City resident, and to commemorate his connection to the Big Apple, the intersection of 40th Street and Sixth Avenue in Manhattan is named "Nikola Tesla Corner." A plaque honoring Tesla can also be found on the façade of the New Yorker Hotel, where the inventor died.

-Tesla died in Room 3327 of the New Yorker Hotel on Jan. 7, 1943. A death mask was commissioned after a medical examiner inspected the body. The mask is on display in the Nikola Tesla museum in Belgrade, Serbia.