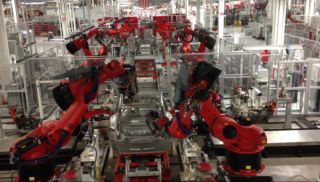 FREMONT, Calif.—Tesla Motors builds one of the world's safest cars out of cheap, lightweight metal in a factory it practically stole from General Motors and Toyota. That's one of the most important ways the electric car company reduced the price of an electric vehicle (EV) from a carbon-fiber Roadster above $100,000 to a mostly aluminum Model S at around $70,000. (Those prices exclude any rebates or tax incentives.) Yet, at the same time, the Model S achieved the highest crash safety rating ever from the National Highway Transportation Safety Administration (NHTSA).

So how has the electric automaker reduced costs and improved safety?

The Model S has become "the Palo Alto Camry," in the words of Tesla marketing manager and longtime auto enthusiast Ted Merendino—and any driver in California’s Bay Area would be forced to agree. Menlo Park–native Merendino, whose passion for cars makes him seem larger than his small frame, owns a Roadster not because he works at Tesla, he says, but because it's an amazing street-legal race car for someone who has "always loved cars." And: "I make poor financial decisions." Unlike Palo Alto, however, only a handful of Teslas dot the fleet of worker vehicles parked outside the Fremont factory on a bright, hot summer day.

A peek under the hood reveals nothing about a Model S because it only reveals a "frunk," (more on that later), so understanding how Tesla constructed such a safe automobile requires a visit to the place where it is made. That's something Tesla customers can do as well—step two in their evangelization after that initial trip to the showroom—to pick up their new custom-built cars and tour the 510,000 square meter facility. Merendino took me around the sprawling factory, more than half of which is unlit and largely used as a repository for materials or left empty.

But the rest of the space's white lacquered floors resound with activity, whether large, single-armed robots welding cars together in a precise ballet or the clatter of keyboards in the open employee bull pen, where CEO Elon Musk holds court at a simple desk across from the production line every Tuesday and Wednesday. A mountain bike leans against his workstation to allow the EV entrepreneur to quickly access any part of the sprawling factory. Scooters are a common sight at the plant as well, their drivers taking pains to steer clear of the minibuses carrying customers on tours.

As Merendino explains, construction of the safest car in North America starts with metal, in the case of the Model S largely aluminum from Alcoa for the chassis and body panels. The lightweight metal requires precise stamping, which means the Tesla factory boasts the largest hydraulic press in North America—some seven stories tall, with three of those stories extending underground. In fact, a total of five hydraulic presses in a row mold complex shapes such as the hoods or sides of the cars. It's a slow press, so as to keep heat and warping to a minimum. A laser cutter is used for more precise work.

The finished shapes head out to the factory floor where car bodies on "smart carts" are guided along magnetic strips. During the two daily shifts, 36 robots made by bot manufacturer KUKA—capable of swapping tools on their extremities—spin in place while delicately positioning parts, such as a roof, with precision—almost as if the machine had fingers rather than giant clamps. "They need to be retrained once in awhile," Merendino says, noting that the factory also has some 3,000 human employees. The company currently makes most of its own components, due to a lack of qualified suppliers. "We actually build the Model S from scratch," Musk explained at an event to launch the car in New York City in November 2012.

The weakness of the aluminum compared with the steel used in conventional cars is made up for with what some might call overengineering: early versions of the Model S had boron-steel inserts in the side panels secured with aerospace-grade bolts. Those have now been replaced with yet more aluminum reinforcements, like those used in the Apollo lunar lander, still secured by the same type of bolts. These aluminum reinforcements absorb impacts, such as a pole rammed into the side at high velocity by NHTSA testing. As a result, the pole breaks or stops the car before it has a chance to ram an occupant. And a double bumper in back protects any passengers riding in the "third row" seating in the trunk, essentially child-size rear-facing foldout seats.

Part of the Tesla Model S's safety is inherent to all electric cars. The lack of the internal combustion engine block means each car can boast a crumple zone at least two times larger than any gasoline equivalent in the "frunk," or front trunk. And the brakes are the same size in both front and back, unlike the case for conventional cars, allowing for more stopping power (as well as battery regeneration).

The low-mass aluminum body allows the largest battery pack of 85 kilowatt-hours to propel the car for nearly 500 kilometers, rather than the 120 or so offered by most pure EVs. The battery pack itself—its layout and mechanics are a trade secret—lashes together at least 7,000 conventional lithium ion cells from Panasonic, each with its own buffer space to prevent a fire from the volatile cells from spreading as well as liquid cooling to whisk away even more heat than conventional air cooling. Although Tesla's lithium ion battery packs have yet to catch fire, even in a crash, the volatile technology will no doubt burst into flame in a high-speed collision at some point. That said, a lithium ion battery remains less volatile than a gasoline tank.

Meanwhile, the more than 500-kilogram battery pack under the floor puts the car's center of gravity a mere 44.5 centimeters off the ground, giving the car unprecedented stability. The Model S is nearly impossible to roll, according to the NHTSA. And then there's the fact that the Model S broke an independent roof crush machine in the NHTSA's test rather than caving in, thanks to reinforcements again attached with the kind of bolts usually reserved for the aerospace industry.

At the end of the assembly line, which can churn out 500 cars a day, a new Model S rolls out onto a bamboo floor (a requirement set by CEO Musk) for a quality check. Then it's off to testing, including an indoor track and the "water box," which is like a souped-up car wash to challenge the vehicle's integrity. "It's Hurricane Sandy in there," Merendino says. (The actual storm helped wipe out Tesla's EV peer Fisker, when saltwater damaged the company's fleet of early models at a pier lot in New Jersey.) As the 2013 Motor Trend Car of the Year caliper-shaped award that sits solo on the sideboard of Musk's desk attests, Tesla has so far escaped any such disasters and hopes to sell more than 20,000 Model S EVs this year. Aluminum may be "a little harder to work with," in Merendino's words, but it's also helped Tesla reduce prices and improve safety. In fact, the least safe thing about the car may be how fast it is to drive.

This article was first published at Scientific American. © 2013 ScientificAmerican.com. All rights reserved.