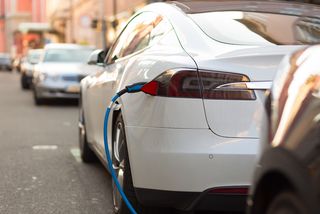 A new wireless power system could help people avoid the inevitable jumbled mess of tangled cords and offer a more efficient way to charge electric vehicles on the go, according to a new study.

Researchers at Stanford University adapted a concept from quantum physics to produce a wireless charger that does something other wireless chargers cannot: automatically tune the frequency of the radio wave — the medium that transfers the power — to account for changes in the distance between the charging pad and the device. In an experiment, the team showed that its system transferred power with 100 percent efficiency up to about 27 inches (70 centimeters).

"The range is perfect for electric cars," Sid Assawaworrarit, a doctoral candidate in electrical engineering at Stanford University, told Live Science. "The floor of a car is about 20 centimeters [8 inches] away from the road's surface. You could embed the charging pad below the road surface." [Hyperloop, Jetpacks & More: 9 Futuristic Transit Ideas]

Assawaworrarit and his colleagues reported their research in a study published online today (June 14) in the journal Nature.

Although other wireless-charging devices, such as those for phones, already exist, the efficiency drops dramatically if the device is too close or too far away from the charger. This means a phone has to be placed on top of a charging pad to work best, and an electric car needs to be parked directly over a pad to recharge efficiently. As such, electronic devices are still tethered, albeit invisibly, to their power source, according to Assawaworrarit.

The problem lies in the design of these wireless power systems. They typically consist of a source, which is the charging pad, and a receiver, which could be a phone or an electric car.

In the source, radio waves of a certain frequency are generated to excite electrons in a coil of wire, called a resonant inductor. The receiver in the phone or electric car also has a resonant inductor made from a coil of wires. When the two inductors are put near each other, the energy gets coupled from the source to the receiver. In the receiver, a component called a rectifier converts the energy from the radio waves to usable electrical energy for the phone or the car.

Finding the optimal frequency for the radio waves depends on the sensitivity of the equipment, the distance between the source and receiver and their orientation to each other.

Once the optimal frequency is found, deviations to the variables used to set it, such as changing the distance between the source and receiver, reduces the transfer efficiency. Assawaworrarit said a tuning circuit can, in theory, be built to adjust the frequency, but the design is complicated and puts limitations on how fast the device can be moved in relationship to the charging pad.

Assawaworrarit and his team created a wireless power system that doesn’t use a source for radio waves, nor does it require a tuning circuit. It also works even if the distance between the resonant coils fluctuates, the scientists said. [10 Technologies That Will Transform Your Life]

The researchers accomplished this by taking advantage of a concept from quantum mechanics called parity-time symmetry, or PT symmetry for short. Like other concepts from the field of quantum science, it's peculiar, but systems built from it have symmetrically arranged parts that either absorb electromagnetic energy or emit it.

In an accompanying analysis of the new study published in the journal Nature, Geoffroy Lerosey a research scientist at the Langevin Institute, The French National Center for Scientific Research (CNRS) and ESPCI Paris, wrote that parity-time symmetry can work to tune different wavelengths of light from a multimode laser into a single-mode laser.

Here, Assawaworrarit and his colleagues simplified the whole setup. They built a system that has a source and receiver, just like in conventional systems. But instead of using radio waves to excite electrons in the resonant inductor, they used an amplifier designed to amplify the electromagnetic energy in the coil. The receiver has a resonant inductor and rectifier, just like in conventional systems, the researchers said.

The physics behind PT symmetry automatically selects the operating frequency that will result in a maximum amount of energy being transferred. It accomplishes this within tens of microseconds and the system, in its present form, can accommodate distances to a little more than 3 feet (1 meter), limited by the use of near-field coupling, according to the study.

"Over a range of distances, the PT physics is such that the gains compensate for the losses," Assawaworrarit said.

Although the researchers tested their idea both in a computer simulation and in an experiment using an LED light bulb, it will take some time for such a device to reach consumers, they said.

In his review, Leroseynoted that the amplifier needs to be optimized, and he also questioned whether this concept will work if one coil is fixed and the other is moving, as would be the case with an electric car driving over a road embedded with charging pads.

"These questions need to be answered before this beautiful concept can have real-life applications," Lerosey wrote. "However, it already builds an inspiring bridge between the worlds of quantum physics and engineering."