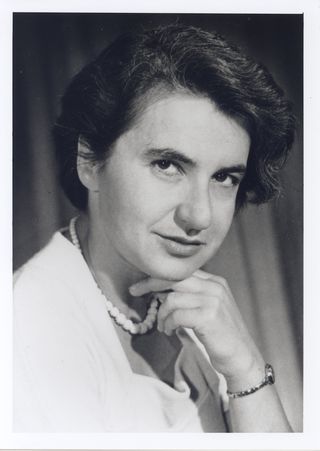 Rosalind Franklin is one of many scientists who never received the recognition they deserved in science.
(Image: © National Institute of Health.)

For most people, the name Tesla probably calls to mind the electric car company, rather than one of the world's most influential scientists. Yet Nikola Tesla, the Serbian-American inventor, engineer and futurist who was born 158 years ago tomorrow (July 10), gave science some of its greatest technologies, from alternating current to electricity supply systems.

But Tesla isn't the only scientist who has been overlooked for his achievements. Here are a few other scientists who were robbed of their dues in the annals of science.

Franklin was working at King's College London, in the United Kingdom, at the same time as Wilkins, and the two had a strained relationship. Meanwhile, Watson and Crick were developing a model of DNA, but lacked physical evidence for its structure. Wilkins took Franklin's photo without her permission and showed it to Watson and Crick, who raced to publish their newly confirmed ideas.

Franklin died of ovarian cancer in 1958, possibly due to radiation exposure from her X-ray crystallography work. A Nobel Prize, which can only be shared among three living scientists, was awarded to Watson, Crick and Wilkins in 1962. Watson's autobiographical account of the discovery, "The Double Helix," barely recognized Franklin's work, even portraying her as a "belligerent, emotional woman."

Lise Meitner (1878-1968) is often cited as one of the most glaring examples of a woman who should have been awarded a Nobel Prize. The Austrian physicist helped discover nuclear fission, the splitting of atoms in a nuclear reaction, or in radioactive decay, that releases massive amounts of energy.

German chemist Otto Hahn performed the first experiments on nuclear fission, but couldn't explain his results. In 1939, Meitner, who was corresponding with Hahn, published the first paper to use the word "fission" in nuclear physics, explaining that the uranium atom splits when bombarded by neutrons. And yet, Hahn alone was awarded the 1944 Nobel Prize in chemistry for the work.

Meitner turned down an offer to join the secretive Manhattan Project in 1943, saying she wanted nothing to do with the atomic bomb.

At a 2013 show celebrating women in science at the Grolier Club in New York, curator Ronald Smeltzer told Live Science, "Lise Meitner is the one woman in this show that I will say unequivocally was cheated out of a Nobel Prize."

The chemical element Meitnerium, discovered in 1982, was named after her.

Though unfamiliar to many Americans, Konstantin Tsiolkovsky (1857-1935) is known as "the Russian father of rocketry." The Soviet rocket scientist of Polish descent, born in 1857, developed the astronautic theory that later inspired Soviet engineers in launching a successful space program. More than a hundred years after he developed them, his ideas are still applicable to rocket science today.

Tsiolkovsky was inspired by the science fiction works of Jules Verne, who wrote about using a giant cannon to launch spacecraft to the moon. Tsiolkovsky originally tried to write his own sci-fi stories, but found himself pursuing the practical challenges of spaceflight instead.

In 1903, Tsiolkovsky published some of the first scientifically viable proposals for sending rockets to space, using a liquid hydrogen and liquid oxygen propulsion system (the same mixture that would eventually be used to launch the space shuttles). Tsiolkovsky developed a critical formula for the mathematical relationship between a rocket's changing mass as it burns through fuel, the exhaust gas velocity and the rocket's final speed. [Mad Geniuses: 10 Odd Tales About Famous Scientists]

Tsiolkovsky is considered one of three "fathers of rocketry," along withGerman scientist Hermann Oberth and American physicist Robert Goddard, who developed many of the same ideas as Tsiolkovskyindependently in the 1920s.

When you think of the theory of evolution by natural selection, Charles Darwin's name comes to mind. But another British biologist working at the same time as Darwin came up with the theory independently: Alfred Russel Wallace.

Wallace conducted a significant amount of fieldwork in the Amazon River basin in South America, and the Malay Archipelago between Southeast Asia and Australia. An expert on the geographical distribution of species, Wallace was sometimes referred to as the "father of biogeography."

Wallace sent Darwin his ideas about evolution around 1857, which were nearly identical to Darwin's. It wasn't until after Wallace (1823-1913) published a paper on his theory together with Darwin's writings in 1858 that Darwin published his famous treatise "On the Origin of Species" (1959), which became one of the world's most influential scientific books.

Both Darwin and Wallace drew their inspiration from the ideas of economics expert Thomas Malthus, who wrote that the growth of human populations is limited by famine and disease. Similarly, Darwin and Wallace realized that animals face the same pressures of competition, with the "fittest" individuals surviving and reproducing.

Jocelyn Bell Burnell (1943- ): Northern Irish astrophysicist who discovered pulsars in 1967 as a postgraduate student, but did not share the Nobel Prize awarded to her adviser for the discovery.

Benjamin Banneker (1731-1806): African-American mathematician and astronomer who built the first striking clock in America and helped survey the boundaries for Washington, D.C.

Annie Jump Cannon (1863-1941): American astronomer who, with Edward Pickering, developed the Harvard Classification Scheme for classifying stars based on their temperature.

George Washington Carver (1864-1943): Agricultural scientist born into slavery who developed hundreds of commercial uses for alternative crops to cotton, such as peanuts, soybeans and sweet potatoes.

Caroline Herschel (1750-1848): German astronomer who discovered several comets, one of which is named after her.

Albert Hofmann (1906-2008): Swiss scientist who invented and tested the psychedelic drug LSD and the active compounds in psychedelic mushrooms.

Esther Lederberg (1922-2006): American microbiologist who discovereda virus that infects bacteria, known as the lambdabacteriophage, in 1951.

Emmy Noether(1882-1935): German mathematician who founded the mathematical branch of modern algebra and was described by many as the most important woman in the history of mathematics.

Paul Otlet (1868-1944): Belgian author and visionary who came up with the idea of a telephone-and-television system very similar to the Internet, called a "Radiated Library."

Vera Rubin (1928- ): American astronomer who pioneered work on galaxy rotation rates, which suggested the existence of what became known as dark matter.

Chien-Shiung Wu (1912-1997): Chinese-American physicist who participated in the Manhattan Project and later helped disprove the law of parity in quantum mechanics, but was denied the Nobel Prize.

Aristarchus of Samos (c. 310-230 B.C.): Ancient Greek astronomer who came up with the idea of a heliocentric universe nearly 1,800 years before Copernicus.