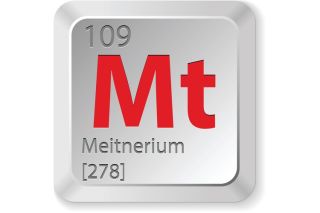 Discovery: The element was discovered in Darmstadt, Germany, in 1982 at Heavy Ion Laboratory. The team of Peter Armbruster and Gottfried Münzenber first produced and identified it. This experiment was significant because, in addition to producing a new element, it demonstrated the feasibility of using fusion to make new, heavy nuclei.

Meitnerium is a radioactive, synthetic element about which little is known. It is classified as a metal and is a solid at room temperature.

Meitnerium has seven isotopes with known half-lives. The most stable is meitnerium-278 (278Mt), with a half-life of about eight seconds. It decays into bohrium-274 (274Bh) through alpha decay.

Meitnerium is produced artificially. It can be made by bombarding atoms of bismuth-209 (209Bi) with ions of iron-58 (58Fe) using a linear accelerator. Armbruster and Münzenber bombarded their target for a week in order to produce a fused nucleus.

Only small amounts of meitnerium have ever been made. Currently, it is only used in scientific study.