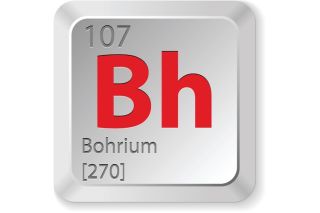 Word Origin: Bohrium was named for Danish physicist Niels Bohr. For a time, it was known as nielsbohrium with the symbol Ns.

Discovery: Bohrium was first discovered by a team of scientists in Dubna, Russia, in 1976. The discovery was confirmed by Peter Armbruster, Gottfried Münzenber and their team working in Darmstadt, Germany, in 1981.

Bohrium is a synthetic element about which little is known. It is presumed to be a solid metal, but since only a few atoms of it have been created, it is difficult to study. The German team identified six nuclei of the element. [See Periodic Table of the Elements]

There are 10 isotopes of bohrium with known half-lives. The most stable is 270Bh, which has a half-life of about one minute.

The atomic weight for manmade transuranium elements is based on the longest-lived isotope in the periodic table. These atomic weights should be considered provisional since a new isotope with a longer half-life could be produced in the future.

Bohrium is produced artificially and only small amounts have been made.

The Dubna team created it by bombarding bismuth-204 (204Bi) with heavy nuclei of chromium-54 (54Cr). A rapidly rotating cylinder, coated with a thin layer of bismuth, was used as a target and bombarded with a stream of chromium fired tangentially. This technique allowed the scientists to “glimpse” the new element for 0.002 seconds.

Only a few atoms of bohrium have ever been made. Currently, it is only used in scientific study.