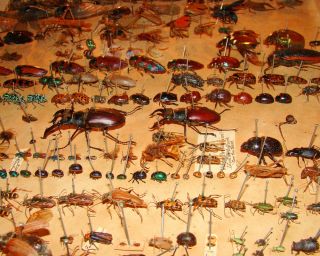 "This is why I have the best job in the world," exclaimed Cynthia Sagers, a program manager from the National Science Foundation, when given the opportunity to see, smell, and even touch the very specimens that British naturalist and field biologist Alfred Russel Wallace collected nearly two centuries ago.

The bugs, butterflies, moths, shells, botanical samples and personal mementoes are a treasure trove of evidence not only of the man himself — an explorer, collector and scientist who was a contemporary of Charles Darwin — but also of his scientific theories on geographical biodiversity and natural selection that were foundational to many fields of modern biological science.

The cabinet was inadvertently acquired several decades ago by Robert Heggestad, a Washington, D.C. lawyer in search of an attractive piece of furniture, but he only recently had the piece authenticated. Since November 2010, the antique, and the 1,700 specimens housed in its 26 drawers, have been on loan to the J. F. Cullman Library at the Smithsonian National Museum of Natural History.

In 2009, the American Museum of Natural History in New York exhibited the Wallace Collection, the only known intact personal collection from the biologist in the world, an exhibit that coincided with the 150th Anniversary of Charles Darwin's seminal book on evolution. The collection is three times the size of the Wallace research collection owned by the National History Museum in London, which is no longer in its original cabinet.