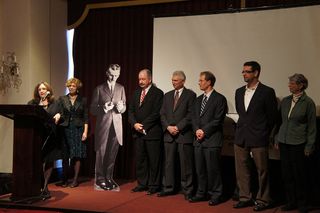 Jane Alcorn and board members of the Tesla Science Center announce their purchase of Nikola Tesla’s former Wardenclyffe laboratory. The group hopes to raise additional funds to turn the historic site into a museum and science learning center.
(Image: © Matt Stafford)

The old, neglected lab of Nikola Tesla, arguably the closest real-world example of the archetype of the brilliant but eccentric scientist, has been purchased by a non-profit group, with the aim turning it into a museum and science learning center.

Tesla patented the logic gate (which makes modern computing possible) in 1898, and pioneered both the alternating current that ferries electricity over long distances and into our homes, and radio technology, which gives us not only Top 40 and talk, but also WiFi.

On the darker side, he thought it was possible to control the weather, and attempted to build a particle beam weapon he said would be able to destroy fleets of airplanes from hundreds of miles away and “cause armies to drop dead in their tracks.”

Despite his more frightening ideas, his concepts and inventions have made huge contributions to our everyday lives. Yet his legacy has been overshadowed by rivals like Thomas Edison and Guglielmo Marconi.

Edison’s laboratory and residence in West Orange, N.J., has been preserved as a museum and a national historic park for half a century. Meanwhile, Tesla’s Wardenclyffe lab on Long Island sits empty, unsecured, and in need of repair.

But the fortune of Tesla’s lab, and perhaps his legacy, are seemingly about to change. A nonprofit group, Tesla Science Center at Wardenclyffe, which has been attempting to save the site for the past 17 years, raised $1.37 million in 2012 with the help of crowdfunding site Indiegog.com and popular Internet cartoonist and author Matthew Inman.

Yesterday (May 2), at a news conference held at the New Yorker Hotel, where Tesla lived the last decade of his life (and where he died, alone and in debt), the Tesla Science Center announced that they had purchased the Wardenclyffe site.

Jane Alcorn, president of the group, told attendees that the 16-acre laboratory site had been purchased from New Jersey-based Agfa Corp.  for an undisclosed sum. [Read also: 10 Inventions That Were Ahead of Their Time]

The event also honored several donors to the crowdfunding campaign that made the purchase possible, as well as friends of the organization who have worked to save the site and buoy Tesla’s legacy over the past two decades.

But while the purchase of Wardenclyffe is done, don’t expect the group’s planned museum and science center to open its doors any time soon.

“Over the next months and years,” Alcorn said at the news conference, “we will be doing whatever we can to clean up the property, restore the laboratory, and begin to make a science learning center and museum worthy of Tesla and his legacy.”

The first step, Alcorn told TechNewsDaily, is to secure the property, which has been vandalized recently. After that, the group will need to secure more funding.

“Obviously we’ll need many millions more, not just the $1.37 million [already raised],” said Alcorn, “but amounts significantly larger than that to create the museum and science center.”

Alcorn says the planning process has already begun “to a certain degree,” but that no designers or architects have been hired yet. However, site planning seems to be on the group’s short-term agenda. Alcorn says that’s how the project’s budget will be set. “Depending on what we decide we need to do, then we’ll know how much money we need to raise,” he said.

One obvious restoration idea would be to rebuild Tesla’s iconic, 187-foot wireless transmission tower. It stood on the site from 1901 until 1917, when it was destroyed by order of the U.S. government, for fear it was being used by German spies.

Alcorn says a scaled-down replica tower may be a possibility, but a full-size replacement is unlikely, especially on the exact site of the original. She said the tower’s foundation area is extremely deteriorated and has been cemented and capped due to environmental concerns.

She speculated that a tower could be built somewhere else on the property, but that it’s not a priority because the group would need to raise millions more to build it, and that zoning would likely be another major difficulty.

Still, with the optimism that comes after raising more than a million dollars in a viral fundraising campaign and fulfilling a 17-year goal to save Tesla’s lab from ruin, Alcorn and her organization don’t seem willing to rule anything out.

“One never knows what the future will bring,” Alcorn said. “I won’t say never.  I just have to say not now.”