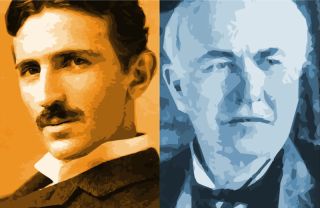 Nikola Tesla would have celebrated his 158th birthday today (July 10).

The Serbian-American scientist was a brilliant and eccentric genius whose inventions enabled modern-day power and mass communication systems.

His nemesis and former boss, Thomas Edison, was the iconic American inventor of the light bulb, the phonograph and the moving picture. The two feuding geniuses waged a "War of Currents" in the 1880s over whose electrical system would power the world — Tesla's alternating-current (AC) system or Edison's rival direct-current (DC) electric power.

Amongst science nerds, few debates get more heated than the ones that compare Nikola Tesla and Thomas Edison. So, who was the better inventor?

"They're different inventors, but you can't really say one is greater, because American society needs some Edisons and it needs some Teslas" said W. Bernard Carlson, the author of "Tesla: Inventor of the Electrical Age" (Princeton Press, 2013).

From their starkly different personalities to their lasting legacies, here's how the two dueling inventors stack up. [Vote: Tesla vs. Edison - Who Was the Greatest Inventor of All Time?]

Tesla had an eidetic memory, which meant he could very precisely recall images and objects. This enabled him to accurately visualize intricate 3D objects, and as a result, he could build working prototypes using few preliminary drawings.

"He really worked out his inventions in his imagination," Carlson told Live Science.

In contrast, Edison was more of a sketcher and a tinkerer.

"If you were going to [the] laboratory and watch him at work, you'd find he'd have stuff all over the bench: wires and coils and various parts of inventions," Carlson said.

In the end, however, Edison held 1,093 patents, according to the Thomas Edison National Historic Park. Tesla garnered less than 300 worldwide, according to a study published in 2006 at the Sixth International Symposium of Nikola Tesla. (Of course, Edison had scores more assistants helping him devise inventions, and also bought some of his patents.)

Though the light bulb, the phonograph and moving pictures are touted as Edison's most important inventions, other people were already working on similar technologies, said Leonard DeGraaf, an archivist at Thomas Edison National Historical Park in New Jersey, and the author of "Edison and the Rise of Innovation" (Signature Press, 2013).

"If Edison hadn't invented those things, other people would have," DeGraaf told Live Science.

By contrast, Tesla's ideas were often more disruptive technologies that didn't have a built-in market demand. And his alternating-current motor and hydroelectric plant at Niagara Falls— a first-of-its-kind power plant — truly electrified the world.

"Our entire mass communication system is based on Tesla's system," said Marc Seifer, author of "Wizard: The Life and Times of Nikola Tesla," (Citadel Press, 2001).

Edison's enduring legacy isn't a specific patent or technology, but his invention factories, which divided the innovation process into small tasks that were carried out by legions of workers, DeGraaf said. For instance, Edison got the idea for a moving picture camera, or kinetoscope from a talk by photographer Edward Muybridge, but then left most of the experimentation and prototyping to his assistant William Dickson and others. By having multiple patents and inventions developing in parallel, Edison, in turn, ensured that his assistants had a stable financial situation to continue running experiments and fleshing out more designs.

"He invents modern innovation as we know it," DeGraaf said.

Tesla's inventions are the backbone of modern power and communication systems, but he faded into obscurity later in the 20th century, when most of his inventions were lost to history. And despite his many patents and innovations, Tesla was destitute when he died in 1943.

At the height of his career, Tesla was charismatic, urbane and witty. He spoke several languages and counted writers Mark Twain and Rudyard Kipling, and naturalist John Muir as friends, according to Seifer.

But Tesla could also be haughty and was known to be a hygiene freak. In his later years, his obsessive tics (such as his fear of women's earrings) grew stronger, and he died penniless and alone in a hotel in New York City, Seifer said.

Edison, meanwhile, was hard of hearing and introverted, with few close friends.

Edison also had a mean streak, which he amply displayed in his vicious attacks against Tesla during the War of Currents. He also gave advice on how to build the first electric chair using direct current (DC), going into gory detail about the techniques needed to do the deed, Seifer said.

Tesla was tall, slender and imposing, with a dashing moustache and an impeccable sense of style, Carlson said. His top hat and tails are even on display in a museum in Serbia.

By contrast, Edison was known to be a bit of a slob.

"We're not really interested in seeing what Edison wore, because it was pretty forgettable," Carlson said.

Edison even wore shoes two sizes too large so that he could slip into and out of them without stooping down to untie them, Carlson said.