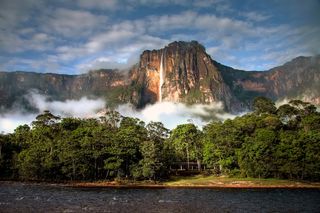 The tallest waterfall in the world is Venezuela's Angel Falls, which plunges 3,212 feet (979 meters), according to the National Geographic Society. The falls descend over the edge of Auyán-Tepuí, which means Devil's Mountain, a flat-topped elevated area of land with sheer cliff sides located in Canaima National Park in the Bolivar State of Venezuela.

Angel Falls is named after an American explorer and bush pilot, Jimmy Angel, who crashed his plane on Auyán-Tepuí in 1937. The waterfall is fed by the Churún River, which spills over the edge of the mountain, barely touching the cliff face. The height of the fall is so great that the stream of water atomizes into a cloud of mist, then trickles back together at the bottom of the plunge and continues on through a cascading run of rapids.

Angel Falls' total height, which is more than a half-mile (almost 1 kilometer), includes both the free-falling plunge and a stretch of steep rapids at its base. But even discounting these rapids, the falls' long uninterrupted drop of 2,648 feet (807 m) is still a record breaker and is around 15 times the height of North America's Niagara Falls, according to the World Waterfall Database, a website maintained by waterfall enthusiasts. [See Stunning 360-Degree Views of Spectacular Victoria Falls (Video)]

However, Angel Falls is only the tallest waterfall on land. Technically, the largest known waterfall lies underwater, between Greenland and Iceland. The Denmark Strait cataract is more than three times the height of Angel Falls, dropping water a whopping 11,500 feet (3,505 m).

The Denmark Strait cataract is also the the top waterfall in terms of volume, carrying 175 million cubic feet (5.0 million cubic meters) of water. Back on land, pinpointing the largest waterfall is a little trickier because there is no universal standard for designating what counts as a waterfall, according to the World Waterfalls Database.

Some waterfalls consist of a single, sheer drop; others include a gentler cascade over rapids; and still others involve a combination of the two (like Angel Falls).

The World Waterfalls Database lists Inga Falls, an area of rapids on the Congo River, as the waterfall with the largest volume. More than 11 million gallons (46 million liters) of water flow through Inga Falls each second. However, without a significant vertical drop, Inga Falls may not count as a waterfall under other classifications.

Of waterfalls that do include a vertical drop, the waterfall with the greatest volume is the 45-foot-tall (14 meters) Khone Falls, on the border between Laos and Cambodia. Spilling 2.5 million gallons (9.5 million liters) of the Mekong River every second, Khone Falls' flow is nearly double the volume of Niagara Falls.

This article was first published on Aug. 10, 2010. Live Science writer Kacey Deamer contributed to an update of this article.