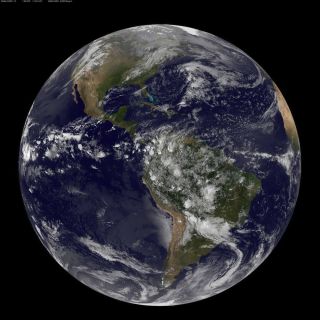 Earth is quite a watery place. Here, a stunning view of our blue planet captured by NOAA's GOES-East satellite on April 22, 2014.
(Image: © NASA/NOAA/GOES Project)

Look at Earth compared to other rocky planets in the neighborhood, and the first thing that would likely jump out is that there's A LOT of water. So how did 70 percent of our planet's surface become covered in this essential life ingredient?

That question is the subject of lively scientific debate, it turns out.

There are two prevailing theories: One is that the Earth held onto some water when it formed, as there would have been ice in the nebula of gas and dust (called the proto-solar nebula) that eventually formed the sun and the planets about 4.5 billion years ago. Some of that water has remained with the Earth, and might be recycled through the planet's mantle layer, according to one theory.

[What Will Happen to Earth When the Sun Dies?]

The ratio of deuterium to hydrogen in Earth's oceans seems to closely match that of asteroids, which are often rich in water and other elements such as carbon and nitrogen, rather than comets. (Whereas asteroids are small rocky bodies that orbit the sun, comets are icy bodies sometimes called dirty snowballs that release gas and dust and are thought to be leftovers from the solar system's formation.)

Scientists have also discovered opals in meteorites that originated among asteroids (they are likely pieces knocked off of asteroids). Since opals need water to form, this finding was another indication of water coming from space rocks. These two pieces of evidence would favor an asteroid origin. In addition, deuterium tends to gather farther out in the solar system than hydrogen does, so water formed in the outer regions of the system would tend to be deuterium-rich.

[See Photos of Meteorites Discovered Around the World]

And on top of that, the rocky inner planets hold relatively little water (relative to their masses) compared with the icy moons of Jupiter, Saturn, Uranus and Neptune, and even the gas giants themselves. That would support the idea that in the inner system, the water evaporated, while in the outer system, it didn't. If water evaporated on Earth it would have to be replaced from somewhere else, and water-rich asteroids are abundant in the outer reaches of the system.

More supporting evidence comes from NASA's DAWN spacecraft, launched in 2007, which found evidence of water on Ceres and Vesta, the two largest objects in the main asteroid belt located between Mars and Jupiter.

A slam dunk for asteroids? Not so fast. For this scenario to work, the isotope ratio had to have stayed the same in the oceans over the last few billion years.

But what if it didn't?

Lydia Hallis, a planetary scientist with the University of Glasgow in the United Kingdom, thinks that the hydrogen present on the early Earth had much less deuterium in it than it does now. The ratio changed because in the early history of the Earth the radiation from the sun heated up both hydrogen and deuterium. Hydrogen, being lighter, was more likely to fly off into outer space, leaving more deuterium behind.

[What If Earth Were Twice as Big?]

Also, in the last several years, newer models seem to show that the Earth retained a lot of water as it formed, and that the oceans might have been present for much longer than anyone thought.

Hallis and her colleagues looked at hydrogen isotope ratios in ancient Canadian rocks, some of the oldest rocks on Earth. The isotope ratios looked a lot less like asteroids and a lot more like the water one would expect from the early solar nebula in the region — the rocks had more ordinary hydrogen and less deuterium. But the current ocean ratio looks like asteroids. That would seem to indicate something changed in the last few billion years. The research was published in Science in 2015.

If the Earth's oceans were formed from water on our own planet, rather than asteroids, that would solve a couple of problems for planetary scientists. One is why Earth seems to have so much water in the first place. Another is why life, which as far as anyone knows requires water, seems to have appeared so quickly once the Earth had a solid surface.

Besides the work of Hallis, other scientists have studied ways water could be recycled from Earth's interior. In 2014, Wendy Panero, an associate professor of earth sciences at Ohio State, and doctoral student Jeff Pigott proposed the theory that Earth was formed with entire oceans of water in its interior. Via plate tectonics, that water has been supplying the oceans. They studied garnet, and found it could work with another mineral, called ringwoodite, to deliver water to the Earth's interior – water that would later come up as the mantle material circulated.

Complicating the picture, neither of these hypotheses is mutually exclusive. Asteroids could deliver water while some could come from the Earth's interior. The question is how much each would deliver — and how to find that out.

So this mystery will remain one, at least for a little while longer.