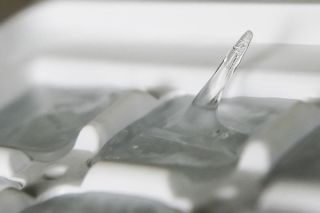 This apparent quirk of nature is the "Mpemba effect," named after the Tanzanian high school student, Erasto Mpemba, who first observed it in 1963. The Mpemba effect occurs when two bodies of water with different temperatures are exposed to the same subzero surroundings and the hotter water freezes first. Mpemba’s observations confirmed the hunches of some of history’s most revered thinkers, such as Aristotle, Rene Descartes and Francis Bacon, who also thought that hot water froze faster than cold water.

Evaporation is the strongest candidate to explain the Mpemba effect. As hot water placed in an open container begins to cool, the overall mass decreases as some of the water evaporates. With less water to freeze, the process can take less time. But this doesn’t always work, especially when using closed containers that prevent evaporated water from escaping.

And evaporation may not be the only reason the water can freeze more quickly. There may be less dissolved gas in the warmer water, which can reduce its ability to conduct heat, allowing it to cool faster. However, Polish physicists in the 1980s were unable to conclusively demonstrate this relationship.

A non-uniform temperature distribution in the water may also explain the Mpemba effect. Hot water rises to the top of a container before it escapes, displacing the cold water beneath it and creating a "hot top." This movement of hot water up and cold water down is called a convection current. These currents are a popular form of heat transfer in liquids and gases, occurring in the ocean and also in radiators that warm a chilly room. With the cooler water at the bottom, this uneven temperature distribution creates convection currents that accelerate the cooling process. Even with more ground to cover to freeze, the temperature of the hotter water can drop at a faster rate than the cooler water.

So the next time you refill your ice cube tray, try using warmer water. You might have ice cubes to cool your drink even sooner.