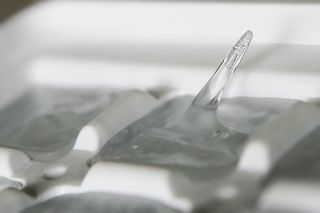 Upon opening the freezer to get some ice, I'm occasionally surprised to find a strange, icy pinnacle rising up from a cube in the tray. Knowing that fluid dynamics and phase transitions are some of the most complex subjects in physics, I suspected these inverted icicle structures might elude human explanation — or, at least, my own comprehension.

But as it turns out, there's nothing too mysterious about "ice spikes," as ice physicists call them.

"The 'pointy' ice cubes are a by-product of down-to-earth primitive design of icemaker trays, not a high science," said Victor Petrenko, a professor of refrigeration engineering at Dartmouth University and lead author of the book "The Physics of Ice" (Oxford University Press 2002). They form from the excess water that is squeezed out of a cube by the freezing (and expanding) ice around it, he said.

"When water freezes and turns into ice it increases its volume by about 8 percent," Petrenko told Life's Little Mysteries. "In 'waffle'-type icemaker trays, water freezes inside each cell from the cell's sides and bottom to its center and top. Sometimes, only a small hole remains unfrozen on the top and the water [from the center] is squeezed through it and freezes there." If the conditions are just right, the water freezes as a tall spike.

Another ice physicist, Matt Bailey of the Desert Research Institute in Reno, NV, describes in microscopic detail what happens to water in a freezing ice cube just before it "spikes": "There are regions where water gets trapped between advancing crystalline freezing fronts advancing through the volume. Water is referred to as an incompressible fluid, and strongly resists being squeezed.

"While the water is freezing there is actually a large amount of 'latent heat' being released due to the phase change [from liquid to solid]. This warming, and the pressure, causes the water to force itself through cracks or gaps between the freezing ice fronts, which, if it makes it to the surface, erupts as an ice spike."