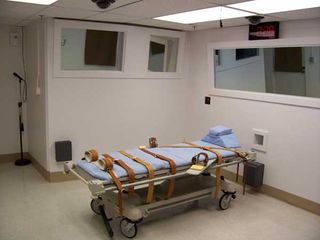 The execution of convicted murderer Albert Greenwood Brown was called off Wednesday, in part because of continuing legal wrangling over the constitutionality of lethal injection in California. However, Brown ultimately won't face the death penalty this week (or even this year) because of another, more practical factor: All of California's supply of a drug used in lethal injections expires today (Oct. 1).

The drug, sodium thiopental, has been in short supply for months, and many state corrections departments are feeling the pinch. The only U.S. manufacturer for the drug, Illinois-based Hospira Pharmaceuticals, says a supply issue with the drug's active ingredient is to blame for the shortage.

The drug's intended use is for anesthesia during surgical procedures and other treatments, company spokesman Daniel Rosenberg told LiveScience. In lethal injections, it's the first of a three-drug cocktail, used to sedate the prisoner before a second drug, pancuronium bromide, paralyzes the muscles and arrests breathing, and a third drug, potassium chloride, stops the heart.

Debate rages about the morality and constitutionality of the death penalty, which is still used in 35 states. Lethal injection is the standard, though a few states allow inmates to choose other methods. There are five methods of execution still legal in at least some states:

How well it works: If done right, hanging should be quick. The body weight snaps the neck and the person dies almost instantly.

Unfortunately for many executed prisoners throughout history, hanging is easy to botch. If the fall is too long, the person's head may come right off. If the fall isn't long enough, the rope cuts off breathing and blood flow through the carotid arteries in the neck. The loss of consciousness due to lack of blood to the brain should be quick, and so should death. But that isn't always the case: After many a gruesome 30-minute-long strangling, the public lost its appetite for hanging in the early 1900s, according to the office of the prosecuting attorney of Clark County, Indiana, which keeps a website on death penalty cases.

How often it's used: Since 1977, three prisoners have been executed by hanging in the United States, two in Washington state and one in Delaware. All chose the method over lethal injection.

On the books: In nine states, all of which use lethal injection as their primary method

How well it works: Conceived as a humane alternative to hanging, the electric chair was first used to execute axe-murderer William Kemmler in 1890. The idea was that massive jolts of electrical current would cause instant death, but Kemmler's execution was hardly a good start for this new method. It took two jolts to stop his heart. Newspapers at the time reported that the condemned man's flesh was charred and smoking by the time he was declared dead.

How often it's used: The last state to use the chair as its only method of execution, Nebraska, declared execution by electrocution unconstitutional in 2008, meaning electrocution is now only used when the inmate chooses it. The most recent prisoner to choose the chair was convicted rapist and murderer Paul Warner Powell, executed in Virginia in 2010.

On the books: In Arizona, California, Maryland and Missouri, where inmates can choose it over lethal injection. Wyoming reserves the right to use the gas chamber if lethal injection is found unconstitutional.

How well it works: In a gas execution, the inmate is strapped into an airtight chamber and fitted with a heart monitor. Next, potassium cyanide pellets are dropped into a bucket of sulfuric acid. The resulting chemical reaction creates clouds of deadly hydrogen cyanide gas, which kill the prisoner.

Like electrocution, the gas chamber hasn't always seemed as humane as hoped when it was developed in 1921. Lethal gas takes time to kill; witnesses to the 1960 execution of convicted robber, kidnapper and rapist Caryl Chessman reported almost nine minutes of gasping and coughing, according to the Los Angeles Times. And in one incident in 1983, convicted murderer and rapist Jimmy Lee Gray gasped and flailed so much during his execution that the warden expelled the witnesses from the observation room.

How often it's used: Only 11 times since 1976. The last gas chamber execution in the United States took place in Arizona in 1999.

On the books: Almost nowhere. Utah inmates sentenced to death before 2004 may choose the firing squad. Oklahoma reserves the option in case lethal injection and electrocution are found unconstitutional.

How well it works: As practiced today in the United States, firing squad executions are carried out by five anonymous gunmen, one of which has a rifle loaded with a wax "dummy" bullet, so none can ever know if theirs was the fatal shot. The condemned person is strapped to a chair and surrounded by sandbags to prevent the bullets from ricocheting.

If the executioners hit their target — the condemned's heart — death should come quickly.  During the 1938 execution of convicted murderer John Deering, the prison physician monitored the inmate's heartbeat, according to Alex Boese's "Elephants on Acid: And Other Bizarre Experiments" (Mariner Books, 2007). The time between the shots to the chest and the man's heart stopping was 15 seconds.

How often It's used: Only three times since 1976, all in Utah. In June 2010, double murderer Ronnie Lee Gardner made headlines (and caused controversy) by choosing to die by firing squad.

How well it works: Thirty-three states use the three-drug cocktail of sodium thiopental for sedation, pancuronium bromide for paralysis, and potassium chloride to stop the heart. Two others (Ohio and Washington) use a single overdose of sedatives to bring about death.

The three-drug method has been criticized, because the paralytic drug could keep inmates from signaling pain if the sedative wears off during the process. Little research has been done, but one 2005 study published in the medical journal The Lancet found that toxicology done on 21 out of 49 executed prisoners indicated anesthesia levels consistent with consciousness.

Death penalty critics also argue that the lead-up to lethal injection can be cruel and unusual. On some occasions, prison employees have struggled to find usable veins on inmates, resulting in drawn-out executions. One 2009 execution (of convicted rapist and murderer Romell Broom) actually failed after the execution team gave up searching for a vein after two hours of trying. Broom continues to appeal his case.

How often it's used: 1,054 times since 1976, according to the Death Penalty Information Center.

Rosenberg, the Hospira spokesman, said the company does not support the use of sodium thiopental (better known as Sodium Pentothal) for the death penalty, though there is little the company can do about it. Hospira sent out a statement pointing out that any licensed health-care provider may purchase the drug from wholesalers or other sources and does not need to go through Hospira.

"Every several years, we've reached out to the departments of corrections around the country to ask that the drug be used correctly and not for capital punishment," Rosenberg said.

However, he said, the drug has legitimate medical uses, and the company hopes to have it back on the shelves by the first quarter of 2011.