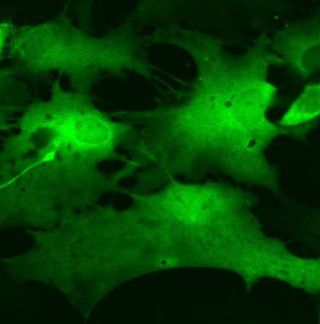 Star-shape brain cells previously thought to take a back seat in terms of the brain's activity might play a key role in controlling breathing, a new study in rats suggests.

When we breathe, we take in vital oxygen and expel waste carbon dioxide. The study results show brain cells known as astrocytes can sense changes in blood carbon dioxide levels and then signal other brain networks to adjust breathing.

"This research identifies brain astrocytes as previously unrecognized crucial elements of the brain circuits controlling fundamental bodily functions vital for life, such as breathing, and indicates that they are indeed the real stars of the brain," said study researcher Alexander Gourine of University College London.

It's possible that these brain cells or others like them contribute to disorders associated with respiratory failure such as Sudden Infant Death Syndrome (SIDS). However, more research is needed to prove the links, the researchers say. Also, while rats are considered a good model for studies on the human brain, future research is needed to make sure the results hold true for humans as well.

The study will be published this week in an early online edition of the journal Science.

The other brain cells

Astrocytes belong to a group of brain cells known as glial cells (glia is Greek for "glue"). Until recently, glial cells were thought to be minor players in the brain, providing structural and nutritional support to neurons, which did the heavy lifting.

"It's called neuroscience because it's neuro-centric," Gourine said. "Astrocytes and other glial cells, they were considered to not be as exciting to study previously."

While no one knows what causes SIDS, previous research has suggested abnormalities in the brain stem or an inappropriate response to low blood oxygen levels could play a role.

"This basic science information has to be used rapidly in order to determine whether glial dysfunction contributes to serious disorders of central control of breathing underlying Sudden Infant Death Syndrome." Gourine said. "If this hypothesis is correct astrocytes may be considered as potential targets for therapy in preventing respiratory failure".

The study was funded by the Wellcome Trust and the British Heart Foundation.