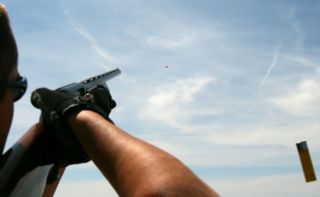 A new technology may make it easier for gun owners to improve their marksmanship.

Opti-sight, a new pistol-aiming device, was developed to reduce the time law enforcement, professional and amateur shooters need for target practice to get better results at the firing range.

Typically, shooters use an optical device known as a "sight" to take aim before firing on a target. Traditional pistol sight designs rely on a square post mounted on the front of the gun's barrel that is visually centered inside a notch on the back of the barrel. Shooters use the two pieces to align the barrel with the target when firing. This method, saysTimothy Kraft, an associate professor at the University of Alabama at Birmingham who designed the device, takes considerable time to master as the brain must work to reconcile inconsistencies seen through the notch, post and target.

"The way a traditional gunsight works is all very disconnected," Kraft said. "In order to get a good shot off you have to visually scan the gap between the front post and rear sight on the left and equalize that to the gap on the right, then align all that with the center of the target. It is too much for the eye and brain to process."

The opti-sight notch also sits atop the rear of the gun barrel, but differs in that it is shaped like an incomplete half-triangle. Kraft says the new design fixes previous flaws by taking advantage of the way the subconscious mind fills in the blanks upon seeing half of a familiar shape like a circle, square, or triangle. So when a shooter looks through the notch, the brain tells the eye where the missing triangle apex should appear and that apex is the precise point of aim.

"Opti-sight makes shooting very intuitive by allowing gunsight alignment to become subconscious," said Kraft, who competes against some of the nation's best pistol shooters and has worked with members of the U.S. Olympic pistol team to test his opti-sight design.

"This triangular shape that I've created allows the brain to visualize concentric triangles whose imaginary apexes focus the shooter's attention on the exact target bullseye," he said.