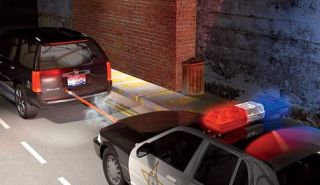 Los Angeles, car capital of the country, is notorious for its epic police chases. O.J.-style pursuits may make for exciting TV, but the fatality statistics are sobering: Police chases kill, on average, one Californian every week.

Now the Virginia-based company StarChase has proposed a safer way to catch fast- moving crooks—shoot GPS homing devices like darts and stick them to the back of fleeing vehicles. Instead of a frantic pursuit, an officer eases off the chase and lets police headquarters track the suspect by computer.

Police can then move in for a calmer arrest.

The StarChase system, which the Los Angeles Police Department will test this fall, consists of a laser-guided launcher and a miniaturized GPS tag complete with a radio transmitter and a blob of gummy adhesive. Once stuck to its target, the tag begins transmitting coordinates to a server through an encrypted cellular network.

Computers superimpose the GPS data over a map that allows dispatchers to track the vehicle's every move.

The LAPD trials will last five months. If all goes well, the department could purchase as many as 20 units by this time next year.