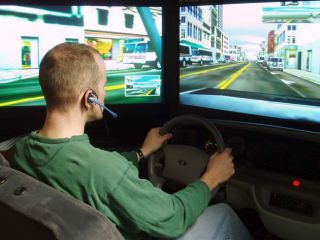 A student talks on a hands-free cell phone while operating a high-tech driving simulator during a University of Utah study. The upshot: Motorists who talk on cell phones while driving are as impaired as drunken drivers with blood-alcohol levels at the legal limit of 0.08 percent.
(Image: © Jim Moulin, University of Utah)

A study in which both the participants and the scientists got sloshed has shown that motorists who talk on cell phones while driving are as impaired as drunk drivers.

The scientists did their drinking during a pilot to the main study, which involved 40 volunteers.

By participating, the researchers gained insight to what makes people think they can drive safely while using a cell phone or when drunk. They're now advocating for laws to address the growing problem.

An unexpected finding: While some of the participants crashed in a virtual vehicle while sober and chatting, none of them crashed while drunk.

The study supports previous research that has revealed the risks of using cell phones and also hands-free cell phones behind the wheel.

"We found that people are as impaired when they drive and talk on a cell phone as they are when they drive intoxicated at the legal blood-alcohol limit," said Frank Drews, an assistant professor of psychology at the University of Utah.

Previous studies have suggested as many as 2,600 people are killed each year in accidents involving drivers on cell phones. About 10 percent of drivers say they sometimes talk on cell phones while driving, and that figure is growing.

A recent poll revealed that two-thirds of Americans would support a ban on using cell phones while driving. A separate poll found 28 percent of cell phone users say they sometimes don't drive as safely as they should while talking.

The volunteers in the new study drove a virtual vehicle four times: once undistracted; once using a handheld cell phone in real conversations; then with a hands-free phone; and finally again after getting tipsy.

The volunteers, all self-labeled social drinkers who were used to three to five drinks a week, were paid $10 an hour.

The drinks—multiple rounds of vodka and orange juice—were on the house.

Blood tests and breathalyzers were used to measure alcohol levels of 0.08 percent—the minimum that defines illegal drunken driving in most U.S. states. Most European countries, recognizing this as quite a level of stupor, have reduced their legal threshold to 0.05.

Some of the participants were visibly out of control, Drew said. "When I saw them walking, I thought, 'Man, I don't want to come close to them when they're driving a car.'"

Those talking on either handheld or hands-free cell phones drove slightly slower, were 9 percent slower to hit the brakes when necessary, showed 24 percent more variation in following distance, and were 19 percent slower to resume normal speed after braking.

Those who were drunk drove a bit more slowly than both undistracted drivers and drivers using cell phones, yet they drove more aggressively. They followed the pace car more closely, were twice as likely to brake only four seconds before a collision would have occurred, and hit their brakes with 23 percent more force.

But nobody crashed while plastered.

The lack of accidents among the study's drunken drivers was surprising, Drew said. Since the simulations were done in the morning, the researchers suspect the drivers were well-rested, perhaps contributing to the lack of virtual drunk-driving accidents.

Some 80 percent of fatal alcohol-related accidents occur between 6 p.m. and 6 a.m., when drunken drivers tend to be fatigued, the scientists point out.

They stress that the results should not be interpreted as an excuse to drink and drive.

"This study does not mean people should start driving drunk," Drews said. "It means that driving while talking on a cell phone is as bad as or maybe worse than driving drunk, which is completely unacceptable and cannot be tolerated by society."

The study, announced today, is detailed in the summer 2006 issue of Human Factors: The Journal of the Human Factors and Ergonomics Society. It is the first peer-reviewed study on this topic to include drinking.

The findings may well apply to in-car television, computers and other devices, the researchers write.

Drew and study leader David Strayer advocate for new laws to deal with a deadly problem they say society is slow to recognize.

For Drew, the issue recently hit very close to home.

In five years studying this topic, Drew said he'd never had an incident with a chatty driver.

"Last week I almost got killed by a driver who was conversing on a cell phone," Drew said today (in a telephone interview from his office).

He was doing about 65 mph on a highway, and the vehicle next to him drifted into his lane, forcing Drew to the shoulder.

"We got off at the next exit. The light was red. I was so upset. I felt really threatened. I got out of my car and knocked on his window. He was still on his cell phone."

After the driver hung up, Drew lectured him on the close call, and he said the driver "said he had no clue" about the situation he had caused.

Drew thinks that's part of the problem. Motorists on the phone don't realize what's going on around them. Previous research, Drew said, has shown that up to 50 percent of the visual cues spotted by attentive drivers are missed by the talkers.

But, as with drinking and driving, people tend to think they can handle it. "Eighty percent of drivers think they are above average," Drew says, pointing out a statistical impossibility.

Not much of a drinker himself, Drew said his experience in the pilot study, along with what he observed in the main study's participants, revealed the false optimism drivers can harbor.

"We started drinking," he explained. "I got to .01 and I already felt I shouldn't drive. But the more you get drunk, you feel more relaxed, and you create an illusion that you are able to operate a vehicle safely."

The main study participants also felt they should not drive as the alcohol began to affect them. "But once they hit .08, they felt just fine," Drew said.

The evidence points to a limited ability to assess our own skills, Drew said, and that limitation extends to cell phone users who drive.  "They don't see that they are veering off the lane and doing other weird stuff."

People tend to believe that other motorists on cell phones are bad drivers, "but they think they don't have the problem," he said.

"We agree that driving while intoxicated is dangerous," Drew points out. "We need to find better technological solutions or we have to start discussing whether [talking on cell phones while driving] is an activity we as a society want to tolerate."